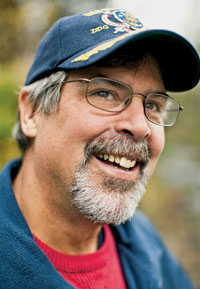 If you call Captain Richard Phillips a hero—he did survive five days at sea with machine-gun-wielding Somali pirates—expect him to put up a fight. "I was just the idiot who got caught," he says. Most people would disagree. From the moment the crew of the Maersk Alabama noticed the bandits' boat approaching, Phillips's fast, focused thinking was critical. "By the time the pirates boarded, we had disabled the ship, secured the cargo, and got almost all the crew into safe rooms," he says. He then convinced the pirates that their best plan was to escort him off the ship. Rescued after five days, Phillips, 54, is back home in Vermont, writing a book and reflecting on what it means to be a hero. "The real heroes are the Navy SEALS who saved me," he insists.