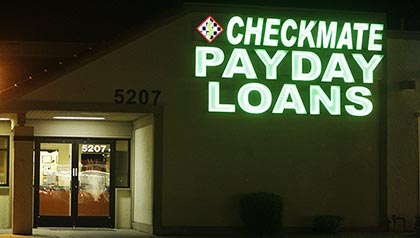 Signs like this one in Phoenix may become commonplace in Pennsylvania if the Senate approves a bill to make it easier for such establishments to operate in the Keystone State.

No short-term lenders, also called payday lenders, are currently licensed to operate in Pennsylvania. But a bill pending in the state Senate would make it easier for them to do so.

The bill would allow payday lenders to impose a 12.5 percent finance charge on each short-term loan ­— equivalent to an annual percentage rate (APR) of nearly 326 percent. Currently the state's rate cap is typically about 27 percent for loans of up to $25,000 and 6 percent for loans up to $50,000.

The bill would cap borrowers' payday loan debt at $1,000 or one-quarter of their gross monthly income, whichever is less.

Lenders would be prohibited from lending more money to a borrower the day a loan is repaid, typically the next payday.

The bill passed the state House of Representatives 102-90 earlier this year and could be voted on in the Senate this month.

AARP Pennsylvania has joined a coalition, Stop Predatory Payday Loans in Pennsylvania, fighting the measure and has urged its members to contact their senators and ask them to vote against HB 2191.

People who are on fixed incomes frequently "take out a payday loan, and they get cycled into this debt trap where they take out loans to pay off the first loan," Landis said.

The coalition sent a letter to all members of the Senate arguing that "HB 2191 opens the door to unscrupulous practices that Pennsylvania has successfully fought to keep out of its borders."

A report from the Pew Charitable Trusts (PDF) showed that 69 percent of payday loan borrowers in 2010 used the loans for regular expenses such as rent and groceries. About one-fourth of all payday loans are taken by people 50 and older.

Rep. Chris Ross, the Chester County Republican who sponsored the bill, said payday loans that are well regulated by the state would be safer than loans from out-of-state businesses. A short-term loan is better than missing a rent payment or charging bills to a credit card, he said.

Next: Do payday loans target the poor? »

In an email, Ross said, "An APR is meaningless on a two-week loan that must be paid off and can't be rolled over, as is required under my bill. Without my bill, loans can be continued for a year without being settled, incurring new interest charges for a year, so it would be possible to accumulate an APR of 325.89 percent."

"They do have a pattern of going after any demographic that has a guaranteed [government] source of income, especially one that is inadequate to regularly cover living expenses," Graves said.

"I've been here 14 years, and it's never been a criteria that my company has used," he said.

Although payday lenders have no locations in the state, some Pennsylvania residents have borrowed from companies with offices abroad, in other states or on American Indian reservations outside the state.

The state Department of Banking has punished some out-of-state payday businesses who lent to Pennsylvanians. In February it fined a Delaware lender $150,000 after several residents filed complaints.

Landis said cash-strapped older people have options other than payday loans, such as borrowing from friends or credit unions.

Pennsylvania credit unions lend up to $500, due within 90 days at an 18 percent APR. Most major credit cards offer cash advances with an APR around 25 percent.

"We certainly don't feel that running up debt on any credit card is a good idea, but the interest rate is much lower," Landis said.

Rebecca VanderMeulen is a writer living in Downingtown, Pa.