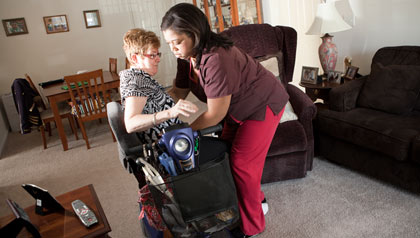 Bernadette Zarrilli stays in her Deptford home with the help of aides such as Shari Lloyd. The AARP voter guide asks candidates their views on how more people could receive at-home care.

En español | State lawmakers who take office after the Nov. 8 election will have a pivotal role in determining the quality of life for New Jersey residents — especially older people. All 120 legislative seats will be filled in the election, and the winners will vote on bills that will affect how much it costs to live in the Garden State.

"New Jersey residents 50-plus want to be able to continue living in their homes, but they can't do so if their utility services are too expensive, their taxes are too expensive, or if they don't have access to home-based, long-term care," said Doug Johnston, governmental affairs manager for AARP New Jersey.

New Jersey has the highest property taxes in the country, yet state budget shortfalls could jeopardize two relief programs.

Candidates were asked whether they would support more funding and continuation of the programs.

Before 2014, when the new federal health insurance reform law takes effect, New Jersey must create an "insurance exchange" for residents and small-business owners who want to purchase health coverage. The exchange will certify good-quality plans and provide information about their rates.

Candidates were asked whether they would keep New Jersey's consumer protection laws if they are stronger than the federal requirements in the law.

Most of New Jersey's cellphone and cable TV industries are deregulated, but legislators have introduced a bill to scrap most of the remaining oversight.

The bill passed the Assembly but stalled in the Senate after opposition from consumer groups, including AARP New Jersey. The bill's most controversial provision would deregulate rates for basic landline telephone service, which costs $16.45 to $23.71 per month including taxes and fees.

The legislation's backers say deregulation would modernize an archaic rate structure and stimulate competition. However, consumer groups predict prices would skyrocket and service quality would suffer.

AARP New Jersey asked the candidates what they would do to ensure affordable utilities, including electricity and basic telephone and cable services.

New Jersey set out to end its reliance on nursing homes with legislation in 2006. Its goal was to find ways of caring for Medicaid beneficiaries in their own homes.

Since then, all of the state's 21 counties have shown a decrease in the percentage of individuals living in nursing homes, and the 2012 state budget increased funding for home- and community-based services.

Yet the promised referral centers are operating in only about half of the state's counties, and nursing homes still account for 70 percent of the state's long-term care Medicaid expenditures.

AARP New Jersey asked candidates how they would restructure the state's long-term care system so more people could get care at home rather than in an institution.

Also of interest: Overview of the Affordable Care Act. >>