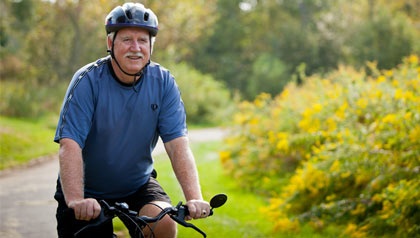 Bob O'Connell, 70, rides his bicycle near his home in Clifton Park. O'Connell was part of a major statewide lobbying effort to secure passage of the Complete Streets legislation.

En español | As a retired social worker for the U.S. Administration on Aging, Bob O'Connell was well aware of the challenges older adults face when it comes to walking across busy intersections. And as an avid cyclist in his hometown of Clifton Park, he knew that certain roads were simply too busy to ride.

"Clifton Park has done a good job, but you've got to be aware of your surroundings," he said.

So O'Connell, 70, was happy to join 600 AARP New York volunteers across the state earlier this year in urging legislators to pass "Complete Streets" legislation. Complete Streets requires state, county and local transportation engineers to take pedestrians and cyclists into account when they design a road.

Complete Streets adjustments may include paved shoulders for bicycles, longer crossing signals and the addition of crosswalks. If adjustments cannot be made — because they may be too costly or present a safety hazard, for instance — the designers must explain their reasons in a report.

To make their case, AARP volunteers dressed in red passed out fliers at the Capitol and spoke at press conferences to help make the public aware of the issue.

O'Connell, a member of AARP New York's executive council, also talked to town and school officials about Complete Streets. "It's an issue that I feel needs continued attention," he said. "I've got six grandchildren here, and at some point they're going to want to bike and go from one development to another development. We need more consideration for walkers and bicyclists crossing safely."

In a nationwide AARP survey of 1,000 transportation planners and engineers, nearly two-thirds said they did not consider older users when designing a road.

Next: New York ranks fourth in number of pedestrian deaths. >>

But older pedestrians are well aware of the hazards. Getting volunteers to push for passage of the Complete Streets legislation wasn't difficult, said Erin Mitchell, AARP New York associate director for outreach. "A lot of them don't drive. They walk, and things need to be more safe and walkable for them."

Volunteers also helped AARP conduct a statewide walkability survey of 500 intersections in April 2010. "It really hit home when they went out and did the surveys," Mitchell said. "They realized, 'Wow, I really don't have time to cross that street.' "

Among those behind the effort was Shirley Bristol, 72, of Albany, a retired registered nurse who walks to go shopping several times a week. Some intersections in the city were difficult to cross, and Bristol worried about the safety of other older pedestrians. "Most times you don't want to cross alone," she said. "I used to wait until there were three or four people with me [before crossing] because I didn't think they'd hit three or four of us at a time."

Bristol's fears are not unfounded. In New York, pedestrians account for 23 percent of total traffic deaths, compared with 12 percent nationwide. According to a study by Transportation for America, New York has the fourth highest number of pedestrian deaths among adults 65 and older, behind Hawaii, Alaska and California.

O'Connell said the complete streets legislation will force designers and engineers to at least consider pedestrians and cyclists. "They don't necessarily have to implement changes, but they have to think about it. That's a significant step forward."

Winnie Yu is a writer living in Albany, N.Y.