While writing her latest book about the progress women have made over the past 50 years, Gail Collins learned she liked the personal stories best. One of her favorite examples was Lorena Weeks. 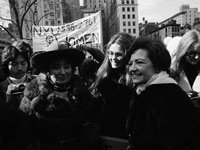 While writing her latest book about the progress women have made over the past 50 years, Gail Collins learned she liked the personal stories best. One of her favorite examples was Lorena Weeks.

In 1966, Southern Bell denied Weeks, a phone clerk, the right to apply for a switchman’s job. The company told her that women weren’t allowed to lift heavy equipment—although she lugged a hefty typewriter out from under her desk every day in order to work—and that women didn’t need the better-paying jobs. She sued, lost, appealed and, after years of hearings, eventually received a court order to go to work as a switchman. Southern Bell ceased to be a place where the lowest-paid man made more than the highest-paid woman. Her case, Weeks v. Southern Bell, was one of the first big victories to ending job discrimination against women.

Collins includes Weeks alongside hundreds of other trailblazing, door-opening women in When Everything Changed: The Amazing Journey of American Women from 1960 to the Present, a chronicle of the grit, stubbornness and courage that triggered tremendous upheaval in the social structure of this country.

As the first woman to head the New York Times’ editorial board, Collins, 63, is no stranger to trailblazing herself. But she credits others—the famous and those considerably less so—who made her ascent possible. For every Rosa Parks, Helen Gurley Brown and Geraldine Ferraro, there are scores of other unknowns who propelled social change. Lois Rabinowitz was thrown out of traffic court in 1960 for wearing pants. Lillian Garland successfully sued her employer in the 1980s for failing to provide job protection after the birth of her child. Lenora Taitt-Magubane, a black woman, dressed up for expected trips to jail after civil rights protests, and Lori Piestewa, a soldier, was the first American woman to die in the Iraq war.

These are the women “who opened windows for me,” said Collins when she spoke to the AARP Bulletin about her book.

Q. What did the nation expect of women before 1960?

A. It used to be “who will I marry?” Life really was simpler 50 years ago. After World War II there was a huge jump in expectations of what life would be like. Nothing like in Jane Austen’s time. But women are really flexible, and we responded.

Q. You said in your earlier book, America’s Women: Four Hundred Years of Dolls, Drudges, Helpmates and Heroines , that emergencies drove women’s lives. What is the emergency now that women have responded to?

A. You can’t get by or have a middle-class lifestyle unless women work. The emergency now is a permanent one.

Q. How did such changes in women’s lives in such a short time unsettle people?

A. It creates tremendous pressure. The work-family divide is the biggest issue for American women. But in some ways it’s amazing how adjusted society has become to it. In the 1970s, as women began to take more jobs, society was reeling. As [writer] Nora Ephron said, the guys woke up and said, what’s happening?

Q. Why did this transformation happen?

A. None of the changes happened because this generation is better than preceding generations. It’s just that women have always done the sensible thing in responding to change, like when women took over farms during the Revolutionary War because the men had left to fight. In the last 50 years, change has been all about the economy. Women are critical to the economy, so we have gone to work. The military is another emergency. Women are needed in the military because there aren’t enough soldiers, and we’re seeing more women serve.

Q. Was there was a backlash?

A. There were hostilities when women moved into the workforce. Men were losing jobs in the 1970s because of the recession and women were replacing them, although I’m surprised it wasn’t worse, given the economic tensions during the downturn. The downside is that women moved up and men were falling down. Even now, wage gaps are narrowing, but it’s because men are going downward. But we have passed the point that jobs have to be saved for the breadwinner. People are well aware that there are trillions of women who are supporting families.

A. Young men now are so different in their attitude toward women than 50 years ago. Women and men weren’t friends in the 1960s. Now they are. Middle-class guys now envision two paychecks and sharing in the home, although they’re still not doing it. I like to tell the story of Steve Weisman when he was a member of my editorial board at the Times. One day he came in to my office. He looked exhausted. When I asked him what was wrong, he said, “My wife’s in Albania and the hamster’s missing.”

Q. What does the push-pull of the work-family divide do to our collective psyches?

A. It’s nothing but good, even with the bad family tensions. There is no way in this world that people who don’t have a real place in the economy are treated with respect. They are never given a real say in their futures. So women having a place in the working world is only good news.

A. Well, now women’s lives are more fraught with options—work, family, education, personal pursuits—and no one wants to give up anything. It’s all really hard. Choice sucks!

Q. What would you say to all the pioneering women if you could talk to them now?

A. The fantasy I’ve always had is that somehow I could move back in time. I would like to be there when Susan B. Anthony was dying, or someone like that. I would say to her, “You won’t believe what’s going to happen.” And then I would tell her.

Q. Did your mother influence your career path?

A. My mother always wanted to be a journalist, but her parents pulled her out of college after her first year. She went to work in the defense industry and became a young war bride. She always told me to write stuff. I even wrote a little book in high school that was published after my mother sent it to a publisher in Boston. My Cincinnati relatives bought a million copies! That made me think I could do anything I wanted to do.

Q. What was your biggest shock as you did your research?

A. Child care is still such a big issue in America. One of the things that stunned me in writing the book was the veto of a national child care entitlement in 1971. I talked to Pat Buchanan, who was working for President Nixon at the time, and he said that he convinced Nixon to veto the bill because it was terrible social policy. They believed the government shouldn’t have anything to do with families. But after that veto Democrats moved further left and Republicans moved further right. The idea of such an ambitious social agenda is unthinkable now, and women suffer because of it.

A. I also loved asking about Barbies. Everybody had Barbie stories, and everybody’s Barbie was having sex under washcloths.

And the breast cancer stories! No one would tell these women with breast cancer if they were going to have a breast or not after surgery. They didn’t find out until they woke up. One woman told me that her doctor asked her husband if he should remove his wife’s breast. Overhearing them, the woman said, “Ask me.”

Q. What’s the next stage in the transformation of women’s lives?

A. Women in America will have to find an answer for the pressures of work and family, but if you really care about women’s issues you have to think about women in the world, especially Africa, Asia and the Middle East. Their problems are different. One of the great issues for Third World women, for instance, is the tearing during childbirth that leaves them in permanent discomfort. And they’re not able to get the medical care to fix this.

Q. Why isn’t your story in the book?

A. People often ask me to tell them what I’ve endured. It’s embarrassing to say I have so little to tell. I came along at just the right time. I think of myself as standing on the shoulders of these women I wrote about. I’m sure part of the reasonI got the Times editor job was because they wanted a woman. I’m a big believer in deciding what you want and making it clear to everybody. I loved uncovering the history and talking to the women. I find it liberating and exciting to have gotten this incredible present.