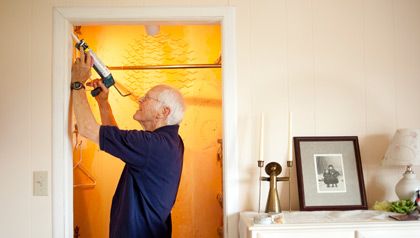 Jack Beckner caulks a closet door in his Dillon home in preparation for renting a portion to vacationers as a way to supplement his Social Security income. He’s worried about the program’s future.

En español | Jack Beckner's primary source of income in his retirement years is Social Security. Any reduction in benefits, he said, would translate into a reduction in the quality of his life.

"I do not have adequate retirement funds left to cover my current standard of living, which is not particularly high," said Beckner, 76, a former engineer and financial consultant.

Because Social Security benefits don't keep up with the cost of living, he's modifying his home in Dillon to rent out part of it to vacationers as an additional source of income.

Beckner, who volunteers with AARP Colorado as a legislative liaison, also is concerned that Medicare has become a political target. "It's been an extremely valuable benefit to me," he said.

While he supports rooting out any waste and fraud, Beckner worries that proposed cuts will reduce payments to doctors. "If they're not paid fairly, we might not get the health care service we need and deserve."

Many people have similar concerns, so AARP Colorado staff members and volunteers will hit the road for a four-city listening tour this month. They will also answer questions about the programs.

Social Security is fully funded through 2036, but the system's trustees have warned for years that the program's finances are under severe strain.

Social Security, Medicare and Medicaid benefits were not cut in the debt ceiling deal Congress approved in early August. But such programs could be considered by a special super-committee appointed to develop a plan to cut $1.2 trillion to $1.5 trillion in federal spending.

But if Congress rejects the committee's proposals in December, automatic spending cuts will kick in and would include payments to doctors who accept Medicare. That could "unfairly shift costs to seniors," said A. Barry Rand, AARP chief executive officer.

Rand said AARP will continue to stress the need to "protect Medicare and Social Security from harmful cuts. With the compounded effect of loss of retirement savings and home equity, high unemployment and rising health care costs, cuts to the benefits seniors have earned could undermine the standard of living of not just those with limited incomes, but middle-class seniors who have median incomes of only $18,500."

Next: Cities on listening tour, schedule. >>

Security, said Beckner, is part of what Americans were promised. He said he's paid into Social Security and Medicare all his working years, "and now I need to collect the benefits of what I paid into it."

More than 693,000 of Colorado's 5 million residents receive Social Security benefits. Two-thirds of the recipients are retirees; others are surviving spouses or children and people with disabilities.

The listening tour also will include a state legislative roundup focusing on AARP-backed efforts, including:

The listening tour schedule is:

You may also like: Protecting the benefits you earned. >>

Cynthia Pasquale is a writer living in Denver.