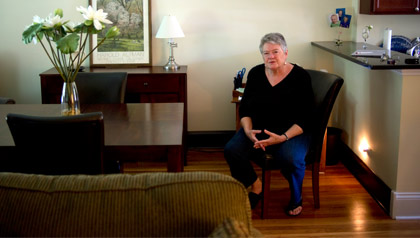 Marguerita Johnston, of Oak Park, worries that Social Security will not be there for her children. AARP Illinois has embarked on a statewide listening tour to hear members' concerns.

En español | Marguerita Johnston enjoys a comfortable, if not luxurious, life on an income of Social Security and an annuity from her job as a full-time executive assistant that she left nine years ago.

But Johnston, 67, of Oak Park, is deeply concerned about her children's financial futures. Her son, 40, and daughter, 38, have worked since high school, though her daughter is currently taking time away from the workforce to raise a family. Neither has a pension. Both have paid into Social Security, but Johnston fears it won't be there for their retirements.

"They used to talk about the three-legged stool: investments, Social Security and a pension," she said. "I do feel like two legs are left, and one of them is getting shaky."

These days, as Social Security's future looks cloudy, parents worry about whether the program will still be viable when their children are ready for it.

Social Security is fully funded through 2036. After that, payroll taxes will provide about three-fourths of its scheduled benefits.

Social Security has become a flashpoint in discussions about how to reduce the federal debt. A plan offered last year (PDF) by former Clinton White House Chief of Staff Erskine Bowles and former Sen. Alan Simpson, R-Wyo., the co-chairs of President Obama's Fiscal Responsibility Commission, called for cutting benefits, taxing higher incomes, and raising the full retirement age to 69 by about 2075.

Although Social Security is currently strong, AARP Illinois is concerned about its future.

"AARP wants to emphasize that Social Security is strong and can pay Americans benefits for the next 25 years," said Heather Heppner, AARP Illinois associate director-communications.

AARP supports "gradual and modest" changes to Social Security, she said. "Congress needs to figure out how to solve budget issues without making damaging cuts to Social Security. We have to make sure it remains strong, as savings, pensions and retirement benefits are dwindling."

AARP also urges members to share their thoughts on the future of Social Security and Medicare.

Rick Law, an estate-planning attorney in Aurora, calls young workers "the pensionless generation." Eighteen months ago, his clients were more concerned about estate taxes. Today, their children's financial security is a top worry. "There's a lot of fear about what's going to happen to their children," he said.

To allay some fears, Law recommends clients build a monthly income stream — perhaps with an annuity — into estate plans rather than create lump-sum inheritances. That monthly income could take the place of a pension, he said.

Dan McGuire is particularly worried about the financial future for one of his three children. McGuire, 67, of Park Ridge, a retired federal employee, and his wife, a retired Chicago public school teacher, enjoy generous pensions.

Although two of his children seem financially secure and are enrolled in pension plans, one of his children has no pension or 401(k), and doesn't make enough in her job as a social worker at a private school for troubled children to save for her retirement. "She's so poorly paid that that's an impossibility," he said.

"The money is there to fund them correctly," McGuire said. "Someone just has to make the right decisions."

Also of interest: 10 things to know about Social Security. >>