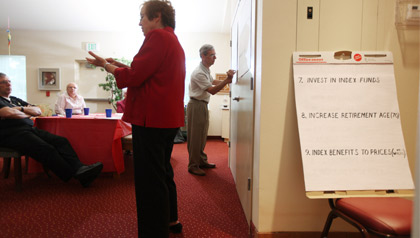 In Boynton Beach, Gloria and Ken Reinhardt lead a group of AARP volunteers and advocates in a discussion about the future of Social Security. AARP is holding similar listening sessions around the state.

Bonita Telford has been dreaming for years about retiring so she can indulge her passion for volunteering. But as the 62-year-old management consultant nears eligibility, she worries the age requirement for her to receive full Social Security benefits — now 66 — might be bumped upward.

"With the political climate the way it is, I am fearful something will happen to thwart my plans," said the Boynton Beach resident. Although Telford knows she'll eventually get her monthly check, she wonders if Social Security will exist for her 37-year-old daughter and 34-year-old son.

Her concerns are being addressed at AARP listening sessions across Florida. The town hall-type meetings include robust discussions and informal voting on proposed changes to Social Security, including raising the full retirement age to 70. The meetings also discuss proposed changes to Medicare.

"We want to make sure we are listening to the people who know the program best and are counting on it the most. We need to find out what changes in Social Security they could and could not support before Congress gets into a battle over solvency options," said Jeff Johnson, interim state director for AARP Florida.

Online discussions are planned for those who can't attend meetings, he said, adding that AARP hopes to gauge younger generations' reactions at college venues.

"Some of my younger coworkers see it as a handout, they compare it to food stamps. It's a real eye-opener when I explain it to them."

She and her husband, Leslie John Telford, 75, have advised their children to prepare alternative nest eggs. But they note it's difficult to convince the younger generation to plan for retirement. "They're not concerned. They aren't thinking about it," said Leslie John.

Their son, Lance, a telecommunications technician who lives in Maryland, contributes to a company 401(k) plan but says retirement planning isn't one of his top priorities.

"I want to be optimistic and say they won't do away with Social Security, but anything is possible," he said. "I think there is an 80 percent chance that some kind of Social Security will be around."

Nine out of 10 people 65 and older receive monthly Social Security benefits. It represents 41 percent of the older population's income, according to the Social Security Administration.

Next: Floridians rely on Social Security. >>

Unless changes are made, Social Security's trust fund is predicted to be depleted by 2036. After that payroll taxes will provide about three-fourths of its scheduled benefits.

"But we don't want to get to that point. We have to do what is fair for us, for the generation behind us and behind them," AARP volunteer Gloria Reinhardt told participants at a listening session in Boynton Beach. Reinhardt, a 67-year-old Coral Springs resident, is one of more than 54 million people receiving Social Security benefits.

Nearly 20 percent of Floridians receive Social Security. Karen Polley, 57, of West Palm Beach, intends to be one of them. The wellness spa owner has even taken a second job to increase her benefits.

"They have to do something [to ensure money is available]. They can't just throw us out on the street. We're the baby boomers, the protesters. I would be the first to protest … if that were to happen," Polley said. "I am not confident that politicians understand how their decisions are affecting the middle and lower class who have worked their whole life. I don't know what I will do if Social Security isn't there for me."

You may also like: Protecting the benefits you earned. >>

Linda Haase is a freelance writer based in Boynton Beach, Fla.