Ten years ago Frederick R. Lynch started work on a book about the graying of boomers — the generation of 70 million-plus Americans born from 1946 to 1964, who are just now beginning to reach retirement age. Lynch, a professor of government at Claremont McKenna College in Southern California, started out with two questions:

Join the fight to protect Social Security and Medicare. 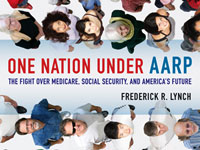 In his new book, Lynch explores "the battle AARP was born to fight." (Click on cover to read an excerpt.)

Those questions loomed ever larger for boomers when the Wall Street meltdown savaged their savings and forced many of them to postpone their retirement plans or even withdraw funds from retirement accounts to cover health care bills and other living expenses.

In searching for answers, Lynch became convinced that boomers would do well to band together politically to protect the programs they will sorely need.

How could the generation deeply instilled with a "do your own thing" ethic and a corresponding distrust of authority and institutions possibly do that?

Freelance journalist Patrick J. Kiger tried to find out when he talked to Lynch about his new book, One Nation Under AARP: The Fight Over Medicare, Social Security, and America's Future.

AARP has been around for a long time, but you've focused on its relationship with the boomers. Why?

Back in the late 1990s I had seen this wonderful PBS Frontline documentary, Betting on the Market, which looked at how heavily dependent boomers had become upon the markets and mutual funds to pay for their retirement. Near the end, someone raises the question of what would happen if, when it came time for the boomers to retire, the market went through a protracted downturn and they lost all that money they'd been counting on. What would they do?

How did that lead you to AARP?

I went to Washington and started talking to people at a lot of different institutions, but I discovered that AARP was the only one that was really studying the boomers and thinking about them. So I started going to AARP events and watching the mating dance between the organization and its new clientele. That's when I shifted to looking at how these two major forces — the boomers and AARP — would come together.

Athough boomers are this enormous demographic group, why aren't they nearly as powerful and influential as they should be?

They haven't formed a voting bloc, at least not yet. There are a lot of political differences among them, and they haven't unified around their interests. They tend to be individualistic, and to distrust institutions.

When I would ask people in Washington, who's going to be our Claude Pepper, all I got were blank stares.

And there's been a dearth of leadership. When I would ask people in Washington, who's going to be our Claude Pepper [Pepper, who died in 1989, championed the rights of older Americans in a political career that spanned 60 years], all I got were blank stares.

As the economic situation gets increasingly dire for boomers, there are three possibilities for what might happen.

One is that they'll continue to practice the "politics of me," with everybody just going his or her own way, in which case they won't have any influence.

The second possibility would be the emergence of a big voting bloc, or even a social movement, centered around the issues of Social Security and Medicare. That's even more of a possibility, now that major changes in those programs are being openly discussed by politicians. When I started working on this book, nobody ever thought that would happen.

The third scenario is that the AARP will become the de facto leader of the boomers and articulate their interests.

Is an aggressive boomer rights movement a realistic vision? Even when the oldest boomers were facing the Vietnam War draft and the struggle for civil rights, only a minority of them actually got involved in protest movements.

It's true that only a small portion of boomers were superactive back then; the mainstream actually was more conservative. But they're older and more experienced and capable now. It would take a critical mass of talented, educated boomers to become the leaders and do the consciousness-raising.

The senior vote always has been divided by race, gender and economics. But that may change, because up until now nobody really has threatened Social Security and Medicare and created the sort of common crisis that would bring them together.

Do boomers and politicians consider AARP a policy advocate?

[Former senator] Alan Simpson, of course, has been the most visible foe of AARP all along. He's the one who says that the organization represents millions of people who are united only by their love of airline discounts.

I'm not agreeing with that, but he brings up one of the problems that AARP has in exercising leadership. It has a dual role. It's an organization that helps its members find reasonably priced services, particularly insurance, which was the one of the reasons for its founding. But there's also the social entrepreneur and advocacy side.

There is confusion in the public mind as to what AARP is, and that's where some of the criticism comes from. Do they really care about us or are they just interested in selling us insurance?

There is confusion in the public mind as to what AARP is, and that's where some of the criticism comes from. Do they really care about us or are they just interested in selling us insurance?

What are your thoughts on that?

AARP can be both an endorser of services and a political spokesman and leader. People such as Simpson may perceive a conflict of interest, but in my research, I really didn't see that. When I talked to people at AARP who were doing research on the boomer generation, there never was any sign that they were concerned about how that would affect the insurance side or anything else.

AARP is unique, and I think this hybrid structure is actually part of the genius of AARP. It's a self-funding lobby.

But that does raise the charges of conflict of interest.

In the book, you make the case that AARP's biggest problem has been what you call "mission drift." Would you explain?

I don't think that AARP founder Ethel Percy Andrus ever envisioned in her wildest dreams that the organization would ever reach 40 million members. But AARP has become so successful and gotten so big that it's a challenge to maintain its identity.

There's a lot of talk at AARP about how it's an organization for all generations, for everybody who has a birthday. I understand where that's coming from, because they want to build consensus. And Andrus did have the mantra, "What we do, we do for all."

But at the end of the day, AARP has to be for seniors. Otherwise, why don't we rename it the American Association of Persons?

Do you have a prediction?

The fight over Medicare and Social Security is about America's future, and it's going to be a tough battle. Aging boomers are not a popular generation. We've got a bad brand, and we're self-critical. We need a champion for us, not one who's talking about all generations. Let other people do that. If I have a current quarrel with AARP, that would be it.

AARP has done a lot already for older Americans, and it can do more. This is the battle that AARP was born to fight.

Read an excerpt from One Nation Under AARP >>

Excerpt From One Nation Under AARP

Aging boomers' senior power potential will depend upon whether age and generational identity transcend other social divisions. As with many other large groups, cohesive political action may fragment along the lines of class, ethnicity, gender, region and religion. Class and education divide boomers and other Americans in their responses to globalization, multiculturalism and changing demographics. This "wine track/beer track" fault line among boomers — along with potent negative stereotypes of each group — widened during the 2008 presidential election and was especially visible in the Democratic primaries.

Nothing unites a group like an external threat — especially one magnified by a major crisis. Thus the deep 2007-10 so-called Great Recession has forced recognition among boomers that a majority of them are financially "at risk" for their old age — at least 40 percent of them were financially ill prepared for retirement before the real estate and market meltdowns of 2008.

Excerpted from One Nation under AARP: The Fight over Medicare, Social Security, and America's Future, by Frederick R. Lynch, published by the University of California Press, © 2011