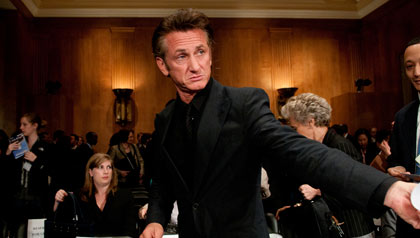 Francis X. Bushman is almost forgotten now, but a century ago he was one of the first silent film stars, a handsome, powerfully built leading man. Traveling by train one day to a benefit in Boston with Mary Pickford, another star of the silent screen often called "America's Sweetheart," Bushman found himself summoned to a meeting with President William Howard Taft, who was also on board.

To Bushman's astonishment, the president told the actor that he "envied" him. "He'd watched the demonstration at the station — Mary had had her clothes almost torn off her, and I looked like the wrath of God," Bushman told an interviewer decades later.

Taft, who was heading for a landslide defeat in 1912, saw in the demonstration all the support that he had lost. "All the people love you," the president lamented, "and I can't have even the love of half the people."

See also: Here are the top 20 celebrity activists of all time.

The encounter between Bushman and Taft is a reminder that the fascination between Washington and Hollywood is nothing new. Al Jolson, then a Broadway star but soon The Jazz Singer in Hollywood's first "talkie," led delegations of entertainers into the Republican presidential campaigns of Warren Harding in 1920 and Calvin Coolidge in 1924. ("Keep cool with Coolidge," Jolson warbled.)

The relationship between the capital of glamour and the capital of power has endured for decades, but it hasn't remained static. From the 1920s to the 1960s, most stars (with such exceptions as Welles and Melvyn Douglas) saw themselves in supporting roles — they were more likely to wave from the stage than deliver a speech from it. As all institutions lost authority in the 1960s, that deference crumbled, and stars became increasingly willing to assert their personal views.

"Who's to say who's an expert?" Paul Newman tellingly declared during the 1968 presidential campaign, when he invested his formidable fame in Eugene McCarthy's primary challenge to Lyndon B. Johnson. "Just because I can sway more people than I have a right to, does that mean I'm not entitled to my opinions or to voice them?"

In the decades since, the star with a cause has become a mainstay of both political and cultural life. Rare is the political campaign or cause so obscure that it can't attract even a single celebrity. Stars, in fact, now participate in politics so routinely that in their visits to Washington or campaign appearances most of them leave no more imprint than a breeze along the beach in Malibu.

Not infrequently, celebrities have stumbled on political terrain, seeming self-righteous or shallow: think of Jane Fonda on the left or Anita Bryant on the right. Even as colossal a cultural force as Oprah Winfrey was seared by a scandal at a girls' school she built in South Africa.

But over the years, some entertainers have made a lasting mark as activists. National Journal, a weekly magazine of politics and public affairs, has selected the 20 (22 if you include couples) most politically effective celebrities of all time. (For the purposes of the list, National Journal defined celebrities as actual entertainers, not executives or producers.)

The measure of effectiveness was this: Which stars made the greatest positive impact on their chosen causes or campaigns?

To answer that question, National Journal interviewed dozens of staff members on Capitol Hill as well as Republican and Democratic insiders to help assess which contemporary stars have been the most effective advocates in Washington and the most valuable surrogates on the campaign trail. The final list represents the assessment of the magazine's editors and is intended not as a last word but as the invitation to start a conversation.

Like everything else in Hollywood, political activism has been in and out of vogue over the years. The past decade has produced a relatively high level of engagement, but activism of a distinct kind.

Two important trends are driving contemporary activism among entertainers. One is a shift away from electoral campaigns toward direct philanthropic action. The second is a shift from domestic concerns toward international issues, particularly the intertwined challenges of poverty, health and violence in Africa and other parts of the developing world. The cumulative effect is that the biggest stars today are less likely to be found campaigning for a candidate in Detroit than visiting a refugee camp in Darfur.

Ronald Brownstein is the editorial director of National Journal and the author of The Power and the Glitter: The Hollywood-Washington Connection. Some of the material in this article was adapted from that book.

For more news and insight from National Journal, go to NationalJournal.com.