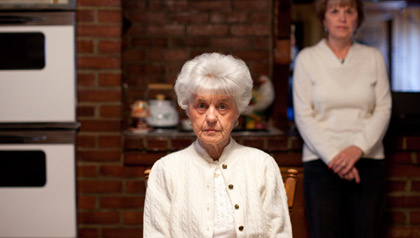 Estelle M. Marshall didn't know she had fallen into the "doughnut hole" until a pharmacist rang up her two prescriptions. They totaled more than $400. "I was dumbfounded," the 88-year-old Salem resident exclaimed.

Marshall's daughter, Joyce Walsh, 69, also of Salem, is her mother's caregiver. "You don't find out until you get to the drugstore, but when her prescriptions came to more than $400, I asked 'How come?' "

The two sought help from the Salem Senior Center. Marshall discovered that her income qualified her for Prescription Advantage, a state program that helps about 61,500 Massachusetts Medicare beneficiaries pay for their medicine. After filling out the paperwork — with help from a SHINE (Serving the Health Information Needs of Elders) volunteer — and joining the program, Marshall's pharmacy bill dropped from $400 to $107.

But as the state struggles with a $1.9 billion budget gap for next year, funding for Prescription Advantage has been cut. Gov. Deval Patrick, D, asked the legislature to reduce funding for the program by nearly $10 million, from $31.5 million to $21.7 million.

Despite the proposed cut, Secretary of Elder Affairs Ann L. Hartstein told the Joint Ways and Means Committee that the program's level of services would, in effect, stay the same. She noted that Medicare Part D money in the new health care law would make up the difference by gradually closing the doughnut hole.

Senate President Therese Murray, D-Plymouth, agreed the program's services would not be affected.

"As the doughnut hole continues to close on the federal level, the cost to the commonwealth has gone down," Murray said. "This will be a win for everybody, states and seniors, as long as we're smart about the transition and make sure we don't completely drop this safety net, especially for lower income seniors who may still need it in the short term. By level-funding the program, the governor in his proposed budget is signaling his intent to make sure seniors remain protected."

But Banda is concerned that Patrick also called for increased copayments for other prescriptions. For those covered by MassHealth, the state's health care program for low-income residents, copays for brand-name drugs would go from $3 to $5; generic drugs would go from $1 to $3.

"We worry that increases in copayments to those who can least afford it will result in them not taking their medicine or reducing the dosage," she said.

David P. Stevens, executive director of the Massachusetts Council on Aging, said he doesn't want the Prescription Advantage program cut below Patrick's proposal. "My hope is that the $21 million will be a baseline. There needs to be a summit with the administration, legislature, advocates and consumers to determine how the program should evolve."

Ed Bell is a retired bureau chief for the Associated Press in Southern New England.

A new AARP survey finds the majority of Bay State residents age 50 and older have major problems paying for prescriptions. Go to aarp.org/ma for information about drug savings and local resources to help.