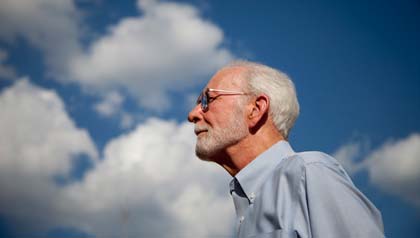 Richard Ray, 70, of Henry County, is concerned about the future for his children and grandchildren. AARP is holding community forums to hear Georgians’ views on Social Security and Medicare.

Richard Ray, 70, and his wife, Marion, are in "pretty good shape" with their monthly Social Security payments.

But Ray, who is retired from a glass manufacturing plant, is worried that Social Security will be insufficient by the time his four children, ages 41 to 45, reach retirement age.

"Will my kids have the same benefit that me and my wife do?" asked the Henry County resident.

To gather ideas on how to strengthen the nation's retirement and health security systems, AARP Georgia is conducting dozens of You've Earned a Say community conversations throughout the state.

Members of Congress and others have suggested a variety of changes to Social Security, including increasing the amount of income that's subject to payroll taxes; enrolling new state and local government employees in the Social Security system; changing the cost-of-living adjustment; reducing benefits for wealthy people; and raising the age of eligibility for full benefits.

Washington is not expected to seriously consider any changes until after this year's presidential and congressional elections.

People who are 50-plus "want a voice in that discussion," said A. Barry Rand, AARP chief executive officer, "and they feel like they've earned it."

Next: Concerns about increasing the age eligibility. »

Daniel Anom, 59, a Realtor in Snellville, said he's worried that one of the changes Congress could adopt next year is increasing the age of eligibility for full benefits.

People born in 1952, the year he was born, can claim partial benefits at 62 and full benefits at 66. Nearly 30 years ago, Congress established a schedule to gradually increase the full-benefits age from 65 to 67.

Carl Dasher, 71, takes four prescription drugs for diabetes and is able to buy a good Medicare supplemental insurance plan that pays for all but $16 of his three-month drug supply. But he knows others aren't so lucky.

"If you've got good insurance coupled with Medicare, you've got good coverage," said Dasher, a former commercial airline pilot who lives in Moultrie. "If you're purely a Medicare person, you're in the second tier."

He wants to pressure politicians to commit to strengthening Medicare. "I would go down fighting hard to see that seniors get the best deal that they can."

The sessions will open with a summary of the current status of Social Security and Medicare. If no changes are made, Medicare's hospital trust fund is expected to be exhausted in 2024 but will be able to pay a percentage of benefits. Social Security can pay promised benefits through 2036 with no changes to the system. After that, 75 percent of benefits can be paid.

That's slim consolation for Ray, a grandparent of 11 and a great-grandfather of one. "Grandparents are always thinking about their grandkids," he said. "What kind of retirement are they going to have?"

AARP Georgia will share the feedback with AARP members and elected officials.

Ray said he wants to send a message to politicians who want to weaken Social Security and Medicare: "You'd better start representing the average worker, or we'll find someone who will."

Visit the AARP Georgia website to locate a You've Earned a Say session.

You may also like: A guide to Medicare Part D. »

Paula Pant is a writer living in Atlanta.