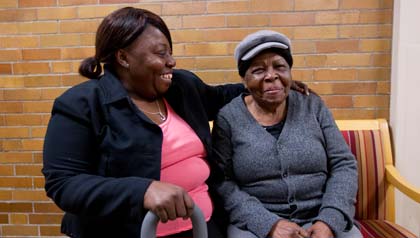 Paulette Martin, left, visits with her mother, Joyce Martin, at a program for people with dementia. AARP Massachusetts says those services should receive adequate funding.

Doctors advised Roxbury resident Thomas Martin, 77, not to leave his wife alone because of her dementia. But with his own health problems, including prostate cancer, Martin found it hard to care for his wife all day, every day.

Joyce Martin, 78, initially resisted her family's solution: a few days a week in an adult day health program. But now she wants to go every day.

See also: What you need to know about caregiving.

More than 11,500 older people are served by roughly 140 adult day health services programs statewide, said Darcey Adams, president of the Massachusetts Adult Day Services Association (MADSA). She predicts the demand for such programs will rise in the coming years.

AARP Massachusetts is watching closely to ensure that sufficient money is allocated for adult day health services when the legislature adopts the budget for the fiscal year that begins July 1.

"With five consecutive years of state budget revenue shortfalls, programs that serve seniors in this commonwealth have been hit hard. Many have been cut to the bone," said Deborah Banda, AARP Massachusetts state director.

"At the same time, need continues to increase due in part to the tough economy but also because of the growing aging population."

Up to 8 hours of care daily

MassHealth, the state's Medicaid program, reimbursed facilities for services to more than 8,000 clients last year, according to MADSA. The reimbursement rate ranges from $54 to $69 a day, depending on the level of care, though Adams said 74 percent of adult day programs do not break even and must solicit donations to fully support them.

Next: Program delays a move to a nursing home. »

Adams said the programs save money for the state by keeping people out of nursing homes, which cost the state $183 a day per person.

The programs also help mitigate shortages in medical personnel because fewer workers are needed in the group settings, she said.

Adams added that families benefit from having their loved ones in a social setting during the day and back home with their relatives at night.

Gov. Deval Patrick (D) says he included $113 million to fund adult day health services in his proposed $32.3 billion budget. But because adult day health and other services for older people are not specifically referenced in the budget, AARP Massachusetts is concerned that money for these programs will be cut or not increased enough to meet the need.

"These are programs that save money in the long run," Banda said. "To target them just doesn't make sense."

State Sen. Stephen M. Brewer, Democratic chairman of the Senate Budget Committee, said older people and children are high priorities, but it is too early to say what would be in the budget.

"We'll do the best we can for people," he said.

Paulette Martin, 48, daughter of Thomas and Joyce Martin, said she hopes lawmakers find the money to sustain the adult day health program. With it, her parents can remain in their home, and she can still work full time.

Martin, who lives in Dorchester, said that without the adult day health program, she would have a difficult choice: work less or put her mother in a nursing home. "That would be excruciatingly hard."

You may also like: An alternative to nursing homes. »

Jean McMillan Lang is a writer living in Milton, Mass.