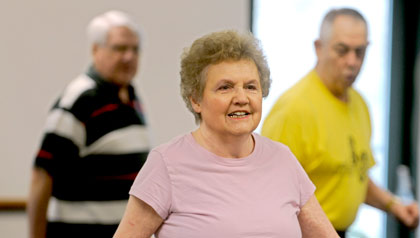 Mary Porter and members of her Silver Sneakers exercise class attended a recent meeting, sponsored by AARP Missouri, to talk about issues they feel are most important to older people.

Mary Porter is an active octogenarian who enjoys her exercise class and volunteering. She is worried about people without jobs in a tough economy and the future of Social Security.

A longtime AARP member, Porter would like to see the association do more for older adults who are unemployed, including her son-in-law who is in his 50s. "If there is any way that AARP can help them get out there and look for work, that would be a wonderful thing," she said.

Porter got a chance to air her thoughts at a recent listening session called Café Connection that AARP Missouri is sponsoring around the state. The goal is to help the organization be more relevant at the local level and create new partnerships with other organizations.

Porter, along with other members of her Silver Sneakers exercise class, was among those attending the Café Connection session held at a YMCA facility in suburban Kansas City.

Café Connection started in February and will run through the early summer. AARP Missouri hopes to hold at least two meetings in each of Missouri's nine congressional districts, said Craig Eichelman, the state director.

The sessions, led by a team of AARP volunteers, last about 60 to 90 minutes and are open to the public.

The idea for Café Connection grew out of Café Con Leche, a similar endeavor in the Miami area. About 60 volunteers throughout Missouri were trained to help moderate the meetings so that opinions are heard in a productive manner.

"We want to ask probing questions that elicit candid responses from a cross section of the community," Eichelman said. "This is an awesome opportunity to truly connect on a local level."

AARP leaders said they hope the meetings will help broaden awareness of AARP's mission and initiatives.

"This is a good opportunity for AARP to get involved more on the local level," said Linda Covilli, AARP's 2nd Congressional District coordinator. "We do a lot of national and state legislative work. Unfortunately, a lot of people think we are strictly an insurance company."

Covilli and a group of volunteers planned the St. Louis area's meeting for weeks. Reservations were required because demand exceeded the room's capacity.

At most Café Connections, AARP volunteers expect questions about the federal health care reform law and insurance. But they also anticipate discussions about a wide range of other issues.

"We want to determine what their views are and what they are proud of in their community and their hopes and their plans for their community," said Tom Wiginton, the 8th Congressional District coordinator. "We want to start a dialogue and have an understanding."

Next: AARP working with municipalities. >>

Covilli and Sidney McCarther, coordinator for both the 5th and 6th congressional districts, agreed that providing more walking trails and exercise facilities are issues on which they see AARP working with municipalities.

"We are serious about getting involved in the community and letting [people] know that AARP is a viable organization in their community," McCarther said. "We can't do everything, but there are things we can partner with the community to get done."

DeAnn Smith is a freelance writer living in Independence, Mo.