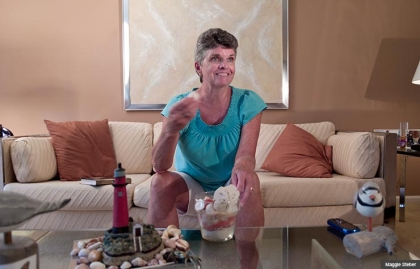 Betty Bowden, of Virginia Beach, was one of 21,000 state residents who responded to a You’ve Earned a Say questionnaire. Nearly half said major changes to Social Security should wait.

A majority of Virginians who expressed their views on the future of Social Security and Medicare said changes are necessary to stabilize the programs, but they're split about what to do and how soon to do it.

"The share of the budget going to entitlements has to slow down. Everybody has to give a little bit, the sooner the better, to go after the problem," said retired foreign service officer Stephen Brundage, 61, of Arlington, expressing a view shared by many Virginians.

Next page: Timetable and biggest challenges for Medicare reform. »

Betty Bowden, of Virginia Beach, was one of 21,000 state residents who responded to a You’ve Earned a Say questionnaire. Nearly half said major changes to Social Security should wait.

Betty Bowden, 65, a retired state employee from Virginia Beach, is one of those who said Congress should not delay fixing Social Security.

"I think we should start very soon to make changes. We're spending too much money and not getting in enough money," she said. "Increase the age of eligibility and cap the amount that wealthier people get."

To make sure Medicare is available for future retirees, 63 percent of respondents said a balanced approach of benefit and revenue changes will be required.

"Medicare will have to be changed because there's just not enough money," said Lorraine Bratton, 73, of Roanoke, a retired clerical supervisor at a utility company.

The responses were collected at AARP Virginia You've Earned a Say events, on a website and from questionnaires in the AARP Bulletin.

The surveys' results were presented to congressional candidates, and will be the basis for informing AARP advocacy next year as policymakers consider the programs' future.

Peter Goldin, AARP Virginia associate director for advocacy, said Virginians recognize that changes are necessary, but they don't want hasty decisions to be made.

"They want something that will be sustained for future generations. They want to make sure any deal brokered is fair for those who are paying into the system now and those who are currently relying on Social Security and Medicare for retirement," he said.

When the new Congress convenes this month, it will face a number of options: an increase in the amount of income subject to the payroll tax that finances most of Social Security and some Medicare benefits; an increase in the eligibility age for both programs; a curb on cost-of-living increases for Social Security recipients; and higher Medicare premiums for higher-income enrollees.

Judi Hasson is a writer living in McLean,Va.