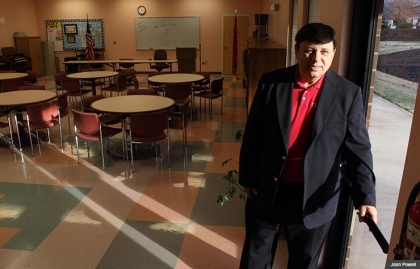 Bob Paredes, 68, president of the AARP Murfreesboro chapter, says people who responded to Medicare and Social Security questionnaires "seemed to appreciate the fact that somebody was listening to them."

Nearly two of three Tennesseans who weighed in on the future of Medicare and Social Security say changes are needed to ensure the programs will be available for their children and grandchildren.

See also: Coloradans weigh in on the future of Social Security.

But they said changes to the programs shouldn't be made immediately, according to the results of AARP-sponsored questionnaires.

Respondents are divided about which changes they support. A slight majority (53 percent) said wealthier retirees should get less or nothing from Social Security.

George Osborne, 71, of Erwin, was typical of that view. He said Social Security "was put in place to keep people from being in poverty in old age. It was not meant to supplement someone's [very high] income."

But 47 percent said upper-income workers should get higher Social Security benefits because they paid more into the system.

Osborne is one of about 4,500 Tennesseans who filled out questionnaires about Social Security and about 4,600 who answered questions about Medicare. Responses were collected at AARP Tennessee events, on the website, by phone and from surveys printed in the AARP Bulletin.

The results were presented to congressional candidates, and they will inform AARP's advocacy this year as policymakers consider possible changes to Medicare and Social Security.

"People were talking about how the government took funds out of Social Security, and they want the government to pay back into that fund so Social Security wouldn't be on the brink of bankruptcy," said Bob Paredes, 68, of Murfreesboro. "They seemed to appreciate the fact that somebody was listening to them." Paredes is the AARP chapter president for Murfreesboro and helped collect responses.

Next page: Full Social Security benefits only until 2033. »

Bob Paredes, 68, president of the AARP Murfreesboro chapter, says people who responded to Medicare and Social Security questionnaires 'seemed to appreciate the fact that somebody was listening to them.'

Medicare trustees have warned that the hospital fund will be exhausted in 2024. Social Security trustees project that the program can pay full benefits only until 2033. After that, payments to beneficiaries would drop to 75 percent.

Congress is likely to consider ideas to change the programs, including an increase in the amount of income subject to the payroll tax that finances most of Social Security and some of Medicare; benefit reductions; an increase in the eligibility age for both programs; a curb in the cost-of-living increases for Social Security beneficiaries; and higher Medicare premiums for higher income enrollees.

Osborne, who collects railroad retirement and is enrolled in Medicare, would like to see people become eligible for Medicare benefits at an earlier age.

"We saw the most consensus among people wanting to save the programs," said Shelley Courington, AARP Tennessee associate state director for advocacy.

Hollie Deese is a writer living in Gallatin, Tenn.