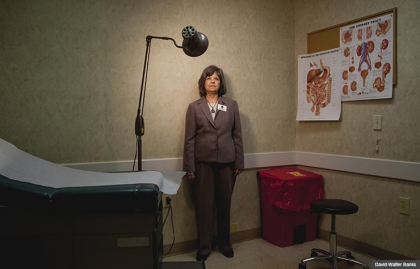 Cheryl Christian, head of Georgia's largest free clinic, says new clients are often unemployed people 50 to 64 who lost their health insurance. AARP wants Medicaid to expand to cover many of them.

The recession has changed the face of the patient population at the Good News Clinics in Gainesville.

Now many of the 2,000 patients are people 50 to 64 years old who lost their health insurance when they lost their jobs.

"Many were in middle management," said Cheryl Christian, the clinic's executive director. "They had insurance all of their lives. Then all of a sudden they didn't."

AARP Georgia's top legislative priority this year is getting many of those people — and hundreds of thousands of others in the same boat — covered under Medicaid, the federal-state health insurance program for the poor.

Currently, Georgia permits eligible individuals with incomes up to $2,820 ($4,272 for a couple) to enroll in Medicaid.

The Affordable Care Act (ACA) expands the eligibility by increasing the income caps and requires the federal government to pay the full cost of those extra enrollees for three years.

That expansion would increase Medicaid enrollment from about 1.5 million to 2.1 million mostly uninsured Georgians, according to the state's estimate. About a fourth of the new enrollees would be between 50 and 64.

But Gov. Nathan Deal (R) said Georgia can't afford the extra Medicaid enrollees even though the federal government would pay the full cost in the first three years and then phase down to 90 percent of the cost by 2020.

In upholding the ACA, the U.S. Supreme Court said states could opt out of the Medicaid expansion. As of last month, Deal said that's what he plans to do.

Deal questioned whether the federal government will have the financial resources to follow through on its promise.

Even if it does, he said, Georgia will not be able to cover its share down the line, which he estimated at an additional $4.5 billion over 10 years. The state spends about $2.5 billion a year on Medicaid.

Cheryl Christian, head of Georgia's largest free clinic, says new clients are often unemployed people 50 to 64 who lost their health insurance. AARP wants Medicaid to expand to cover many of them.

Before the economic downturn, Georgia's largest free clinic mostly saw people who had been without insurance for many years: the homeless and minimum-wage earners.

The $4.5 billion is an inflated figure, said Timothy Sweeney, director of health policy for the Georgia Budget & Policy Institute, a nonpartisan organization in favor of the expansion.

He said the $4.5 billion estimate includes costs that are separate from the Medicaid expansion and does not include projected revenue from a premium tax paid by managed-care companies that administer Medicaid under state auspices.

Even so, the Deal administration's estimate represents less than a 2 percent increase in state spending over the next decade, Sweeney said.

"This is not a budget buster."

Can't afford to say "no"

The state cannot afford to pass up the opportunity to have more of its citizens covered, proponents of expanding Medicaid say.

For instance, providing Medicaid coverage for middle-aged people would ease the later financial burden on Medicare, the federal government's health insurance program for people 65 and older, Sweeney said. That's because chronic health conditions would be better managed before people qualify for Medicare.

It also would boost the state's economy because of additional payments to doctors, nurses, hospitals and pharmacies, he said.

Opting out of the Medicaid expansion will continue to put pressure on the safety net that includes free clinics and public hospitals, AARP Georgia and other advocates say.

"If we shine a light on what the expansion will do for the state, I think we have a shot," said Kathy Floyd, AARP Georgia associate state director for advocacy.

During the legislative session, AARP Georgia will support a bill to allow workers to use their sick time to care for an ill family member.

Ann Hardie is a writer living in Atlanta.