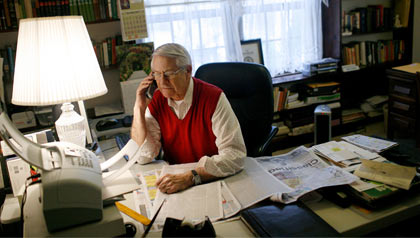 Fred Fields, an AARP Tennessee volunteer advocacy leader, is working to defeat legislation that would allow state and local governments to post public legal notices online only rather than in newspapers.

Thousands of Tennesseans could be left out of the public information loop by proposals pending in the state legislature, and Fred Fields wants to keep that from happening.

His concern is with bills that would let city, county and state governments post public notices required by law only on the Internet rather than in newspapers. That could happen if public notice bills catch fire during the General Assembly session that starts Jan. 10.

"There are a lot of people, especially older people, who … do not even have a computer within their house," said Fields, 73, an eight-year AARP Tennessee volunteer advocacy leader from Norris. "They are totally electronically isolated, and they do not have use of the Internet."

Defenders of the bills say they are trying to lower the costs of publication and to keep up with technology. Opponents see the bills as an infringement on open government.

Fields, a former journalist and semiretired lawyer, serves as the AARP representative on the Tennessee Advisory Committee on Open Government, which advises the state's Office of Open Records Counsel.

During last year's legislative session, he and other AARP Tennessee volunteer advocates fought against 19 bills that would have reduced the requirements for public notices. He plans to do so again if needed.

Defeating the public notice bills will again be a top priority for AARP Tennessee and its volunteers.

The Campfield bill would have created a pilot project to post public notices online only, not in print, in Knox County from September 2011 through August 2013. The Watson bill applied only to Hamilton County and its cities. Neither bill reached the floor.

Watson said he proposed his bill because Hamilton County officials asked for it as a way to save money. "Obviously, the ability to publish a public notice electronically is far less expensive than in print."

Watson said he will not push his original bill this session but may introduce a bill to have a central website for all levels of government in Tennessee to post public notices.

Next: Prepare for the future. >>

As people move to electronic methods of getting information, the state needs to be ready to provide it by using the latest technology, he said. "We need to be talking about getting ready for the future. If 50 percent see it, word of mouth will take care of the other 50 percent."

"I represent a predominantly rural area, so access to the Internet is an issue," Finney said.

A 2010 AARP survey showed that only two out of five adults 50 and older in the United States were comfortable using the Internet.

Another of the bills' opponents is the Tennessee Coalition for Open Government, a group formed to preserve and improve government transparency. Its former executive director, Frank Gibson, said that while some citizens may have access to a website notice, thousands without computers may only learn of a public hearing or a zoning change after the fact.

Gibson, now with the Tennessee Press Association, said the bills would give the government greater control over the release of public announcements, whereas a requirement that notices be published in newspapers gives the public adequate time to plan to attend government meetings.

Also of interest: Internet use in the backcountry. >>

Rebecca Ferrar is a freelance writer based in Knoxville, Tenn.