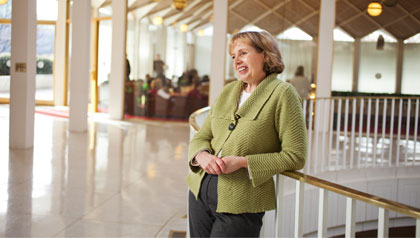 Through AARP, Jeanne Van Divender of Raleigh learned to effectively communicate with lawmakers about issues that affect older people. Training for new volunteer advocates is in March.

After retirement, Jeanne Van Divender of Raleigh was searching for a new activity — one where she could make a difference — when an email from AARP North Carolina piqued her interest: Would she want to volunteer as a legislative advocate?

Van Divender, 56, said she once doubted the value of even writing a letter to lawmakers. But after signing on to be an AARP advocate for the first time in 2010, she sees her involvement in the lawmaking process differently: "I'm doing my part."

By the end of the legislative session, she knew which lawmakers responded best to email, which preferred face-to-face conversations and which she needed to reach on the phone.

For the past four years, as many as 120 volunteers from across the state have worked as AARP legislative advocates each year, learning how to be persuasive, how to develop relationships with legislators and how to help shape laws that have ramifications for people 50-plus.

Bill Wilson, AARP North Carolina associate director for advocacy, said the volunteer advocates are particularly helpful because they frequently offer personal stories that show how policies from Raleigh affect people in their hometowns.

In March, to prepare for the return of the General Assembly in May, AARP North Carolina staff will equip volunteers with issue briefings, polls and best practices for approaching legislators.

Volunteers often learn from each other and share tips on forging relationships with legislators. One of the best strategies for volunteers is to meet with lawmakers in their hometowns for lunch or coffee before the session begins.

"It's much better received. It's a much more meaningful conversation to have a cup of coffee in West Jefferson and not have them pulled in six different directions" at the Statehouse, Wilson said.

Volunteers study dozens of legislative proposals on a wide range of issues, including health and long-term care, Wilson said.

This spring the legislative advocates will press their cause in a situation defined by difficult economic conditions and a Statehouse still adjusting to a Republican majority in both chambers.

"We've got to make sure the people who make the decisions have all the facts," said Denny Hoadley, 68, an AARP legislative advocate who lives in Cary.

For instance, he cites census statistics that show that about 11 percent of North Carolina's 65-plus population live in poverty. And that the number of residents 65 and older is expected to nearly double by 2030.

Hoadley said the work is satisfying. "I get a sense of pride knowing I have the ability to maybe influence the legislature and have my voice heard."

One of the top priorities for AARP North Carolina again this year is expected to be funding for home- and community-based services that allow older people to stay in their homes and avoid more expensive institutional care.

Some 17,000 North Carolinians are on a waiting list for the services, including home-delivered meals.

Concerns about cuts to Social Security and Medicare motivated Dick Brown, 74, of Winston-Salem, to become a volunteer advocate three years ago.

Brown said he was surprised and impressed by the scope of issues and how deeply the laws discussed affected older North Carolinians, especially those receiving Medicaid (pdf).

As it was in the 2011 legislative session, Brown said, funding for many of these issues will be an uphill battle.

"They're cutting a lot of stuff. There's no way around it," he said.

Prospective advocates who live in a legislative district where volunteers are needed must fill out an application. The best starting point, Wilson said, is to join the advocacy mailing list.

Mike Gruss is a writer living in Norfolk, Va.