When men meet Lawrence McRae for the first time, they usually hear something like this: "Let's talk about your prostate."

While that may seem a sensitive topic to discuss with a stranger, McRae is not at all reluctant to bring up the subject to practically any man he meets. As he travels around rural Alabama, he'll approach men in the barbershop, at church or even in the McDonald's where he gets his morning coffee.

No wonder the 75-year-old has acquired the nickname "Prostate Man."

"My goal is to convince African American and other minority males to get prostate screenings so they can live long and healthy lives," says McRae, a retired county employee who became an outspoken advocate for prostate health about a decade ago. "Many of the men I meet don't have an understanding of their risk of prostate cancer and what they can do to prevent it."

McRae's interest in the subject began about 10 years ago when his two brothers were diagnosed with prostate cancer and he himself was diagnosed with an enlarged prostate. They all survived the scare, but the experience prompted McRae to try to learn more about the disease.

In the course of his research, McRae discovered that black men are twice as likely to get prostate cancer and nearly three times more likely to die from it.

So using his own funds, he began printing fliers and personally distributing them around the 250 square miles of Alabama's poorest counties known as the "Black Belt." To get the word out, he started the McRae Prostate Cancer Awareness Foundation.

His biggest barrier was getting people to listen. 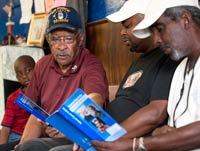 Lawrence McRae chatting in a barbershop about prostate health.

"Many blacks, particularly men, don't have much confidence in the medical system," McRae says. He thinks that's a holdover from the Tuskegee experiments, which were conducted in the area beginning in 1932.

That's when the U.S. Public Health Service used 400 African American men as human guinea pigs in a study on syphilis and how it would progress untreated. None of the men were told they had the disease, nor were they treated even after penicillin was discovered to be curative.

McRae hopes to change attitudes about health care, particularly when it comes to prostate health. So he heads out to places where men gather and encourages them to get annual screenings.

He tells them that men should generally start getting annual prostate exams around the age of 50, but if they are black or have a family history of the disease, the exams should start at 40. He also urges men over 50 to get a yearly PSA (prostate-specific antigen) blood test, which can detect prostate problems.

McRae says his work is time-consuming and it doesn't garner much recognition. Though he's received several grants, including a recent donation from Wal-Mart, most of the funding comes from McRae's pocket.

His wife of 55 years helps out around the office, but eventually McRae wants to turn the foundation over to someone younger. Until then, he will continue to talk about prostate cancer to anyone who will listen.

"I'm just a nobody trying to help everybody," McRae says. "There are times that I felt like giving up, but I still have faith that something good is coming out of this. Over the last nine years, I've helped about 1,000 men. As long as it's saved someone's life, I'm happy."

Latisha R. Gray is a freelance Web producer and writer based in Washington, D.C.