En español | The American Dream usually translates into a home and a car, a good education and a rewarding career. Achieving this dream often demands sacrifice and commitment, particularly for Latinos pursuing the dream for the second time at midlife. 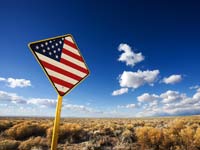 Here are two stories of Hispanics 50+ who believed in their dreams and pursued them — for the second time around.

Miguel Dorantes had already achieved one American Dream: He'd launched a successful roofing business after immigrating to the United States from Mexico in 1983. Then a surprising event pushed him to strive for even more.

After his wife's labor accelerated so quickly that there was no time to summon help, Dorantes delivered their daughter, with no medical training. "I thought to myself, 'I'm not too bad at this. I think I could become a good doctor,'" he recalls.

But the timing wasn't ideal for a career change. He and his wife, Linda — sweethearts since they attended high school together in Mexico City — had been married for five years and had started a family. Dorantes, then 31, had invested years in building his business in metropolitan Los Angeles. But Linda, whose bachelor's degree led her to specialize in working with students who are visually impaired, encouraged her husband to pursue his desire despite the sacrifices they'd have to make.

With a diploma, she says, "I felt so accomplished." She wanted her husband to have the same fulfilling experience she had in school: "He loves medicine. How could I deny him?"

Dorantes was accepted at the Universidad Autónoma de Baja California in Mexicali, Mexico. The family — now with three daughters younger than 10 — moved to Calexico, right across the border in California, so the girls could attend U.S. schools. Linda worked full-time and took the lead in raising their children.

In Mexico, the costs of medical school are paid by the government, but Dorantes still needed to work weekend construction jobs in Los Angeles to support his family. This didn't strike him as unusual until he told a classmate, who remarked: "I don't know how you do this. I devote all the time I have to medicine. You have to find time to work, for your family, and you're doing well."

Next: How to become licensed in the United States. >>

So well that Dorantes graduated and was licensed as a doctor in his homeland. But he wanted to practice north of the border, which led to two more years of training through the University of California, Los Angeles International Medical Graduate program. The initiative, created to address California's shortage of bilingual and bicultural doctors, offers a fast-track program to prepare Latin American doctors to become licensed in the United States.

"These are people who have a tremendous amount of drive," says Michelle Anne Bholat, M.D., executive director of the UCLA program, of doctors who participate in the training. Among them, she says, Dorantes stood out as "extraordinary."

Dorantes completed the program, passed his U.S. exams and now, at age 50, awaits an assignment to a three-year residency program, one he hopes will be in a rural California community where bilingual and bicultural doctors are desperately needed. That preference, he says, was influenced by Spanish-speaking patients who told him, "We need people who will listen to what we have to say and understand what we're going through."

From the day of his daughter's birth to the end of his residency, Dorantes's devotion to his dream will span nearly 20 years. "It's been a very difficult road, but in the end, it will pay off," he says. "I feel a sense of pride that I conquered this goal that I set for myself."

Still, the price was higher than just the years and cost of his education. Linda, weary of the all-consuming nature of Dorantes's journey to become a doctor, wants to end their marriage.

"Some people you will always love, but I have to love myself more and need to take care of myself," she says. "The organization of medicine is done in a way that puts families at risk. It's not healthy. [Doctors] don't have a balanced life."

Dorantes acknowledges, "I was pursuing this dream, and there was less time for the family." So it's a bittersweet time for him and his family. But, he explains, "I have a profound love for medicine, and you have to be in love with this profession."

Next: Costs and rewards from restarting at midlife. >>

Unlike Dorantes's, Barbara Serrano's second American Dream didn't arrive prematurely. Hers was more like a seed that grew over time, one planted by an inspiring story about a judge she wrote a decade ago.

For many years, it was easy to keep the seed from fully sprouting. Serrano was enjoying a successful career as a writer and editor at The Los Angeles Times and The Seattle Times, and as an officer of the National Association of Hispanic Journalists. Family needs were a high priority, even more so when she took over her 85-year-old father's affairs as his dementia worsened following her mother's death.

She was running a newsroom as managing editor at the Yakima Herald-Republic in central Washington, but her focus started to change as the economic downturn hit the media industry and an invitation from a local judge arrived. Serrano was asked to join a Washington State Bar committee dedicated to raising public awareness about the court system. The slow-growing idea of becoming a lawyer blossomed. She took the law school entrance exams, and in June 2010, at age 49, Serrano started classes at the Seattle University School of Law. "Law school is so intellectually stimulating and interesting and challenging," she says. "I wasn't getting that challenge anymore in journalism. The challenge there has become about fighting for resources."

She's not straying from public service, something that both professions have in common, she says.  Serrano wants to become a community-minded attorney. "Wherever this new path takes me, I want to be part of the movement to increase public understanding of the courts," Serrano wrote in her law school application essay. "I would like to become a prosecutor and apply what I learned to help shape public policy."

Despite her excitement, Serrano is worried about the practical implications of her decision. After seeing how demanding her studies are, she gave up on her plan to work part-time and is borrowing money. Unable to sell her house in Yakima, she decided to rent it out until the market improves. In late September, she became a renter, too, moving into a two-bedroom apartment in Seattle.

In many ways, Serrano's dream hasn't unfolded the way she'd imagined. At this point in her life, she thought she'd be married, with four children heading off to college themselves. Instead, she's 10 years divorced, with no kids.

"Some days I think, 'What the heck am I doing?'" she says. "But there is that 'Mexican faith,' that feeling that this is the direction I should be going in. I'm walking into an abyss, but still have faith that things will turn out. It definitely feels like the right move."

You may also like: Practical advice for internationally-trained professionals.