Hard labor marked most of Alferd Williams' 70 years. Tending the field, digging ditches, pouring concrete, driving tractors and hauling lumber: you name it and it seems Williams has done it. But these days you won't find Williams on a farm or on a construction site.

Instead he's sitting Indian-style on the carpet in Alesia Hamilton's first-grade classroom at Edison Elementary School in St. Joseph, Mo., alongside a bunch of 6-year-olds. Perhaps Hamilton is reading "Little Bear," one of Williams' favorites, or maybe she's showing the group how to spell the word "behind." Either way, you'll find a smile on Williams' face because at long last he is learning to read.

Williams had to farm as a child after his dad fell ill, leaving no time for school in his native Tennessee. Then came marriage and nine children. He tried to learn to read in 1996, but the tutor yelled at him like a parent scolding a child and that was the end of that.

Two years ago Williams regularly picked up a friend's children from school. While waiting in the hallway, he would hear Hamilton speak softly and respectfully to her pint-size pupils. Soon, Williams began arriving 30 minutes or an hour early at the school. He would tell Hamilton that he'd been out walking and didn't want to be late. But the truth was that he wanted to hear her lessons.

One day Hamilton sent home a note with one of the children Williams picked up each day.

When she asked Williams about the note, he admitted that he couldn't read. Within a few days, she agreed to teach him. 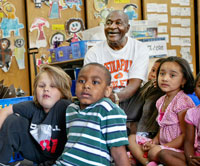 After some private summer tutoring with Hamilton in a local library, Williams began attending Hamilton's class in fall 2006. Ever since, he's been among the kids for half the day, stretching out on the carpet for group reading or playing kickball in the field out back.

"I just had a feeling that he would blend right in and he did," says Hamilton. "He will just laugh like the kids because it's all new to him." Williams says his newfound reading abilities, which are between a second-and third-grade level, give him freedom. "You don't have to wait on anybody to help you," he says. "I used to buy a whole lot of canned goods that I'd throw away because I would think I'm buying one thing and I'd buy another. It freed me from being scared to get stuff."

Finally, after years of taking care of everyone else, Williams is learning to be independent. He plans to stay in first grade for another year. Then, he'll move on to another classroom at Edison. Eventually Williams hopes to get his GED and attend college. But in the meantime, he's elated to read the "exit" sign at the doctor's office or understand that in case of a fire, he shouldn't use the elevator.

It's the little things about being able to read that make Williams feel like a real man. Take for instance a recent trip to Memphis, a trek he's taken countless times. Before Williams could decipher the sign indicating where the bus would board, he'd wait for the driver to announce it.

That meant the best seats were already taken by the time he got on. But on this occasion, Williams for the first time was at the front of the line and got to choose a seat far, far from the engine's roar.