Exactly what is middle age?

Where, and how, did the term originate? Above all, why is the term so fraught with negative connotations today — and how do we handle that? Patricia Cohen, a reporter with the New York Times, was determined to find the answers to these and other burning questions.

See also: Excerpt from In Our Prime: The Invention of Middle Age. 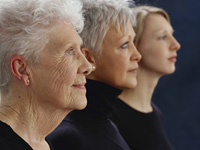 In a youth-obsessed culture, boomers find it hard to define and embrace middle age.

"I've always been interested in history," the 51-year-old New York-based writer said in an interview with the AARP Bulletin. "But while there are histories of childhood and of the teenage years, there didn't seem to be one of middle age." So, like so many writers before her, she wrote what she wanted to read – and ended up fulfilling a personal goal by completing her first book.

In Our Prime: The Invention of Middle Age delves into the invention of the idea of middle age in the second half of the 19th century. It also covers what Cohen calls "the middle age industrial complex." And it explains middle age as a source of identity as well as stress, opportunity and new beginnings.

Q. We want to celebrate middle age, yet we also want to deny it. Why such a catch-22 about this stage of life?

A. We live in a culture that celebrates youth so much, so the term is a particularly difficult one to navigate. At the same time, there's the demographic fact of the baby boom generation. There are so many people in this age group, and these shared numbers help in terms of what we're beginning to see, whether it's on television shows or whether people are more willing to admit to — or own up to — their age.

Q. Why is the term "middle age" so loaded?

A. It's taken on a negative connotation that's hardly flattering, just as the words "feminism" and "liberal" have taken on different meanings and negative connotations. "Middle age" has become a synonym for defeated, for tired. That's one reason why the alternate word "midlife" has increased in use recently. There aren't quite so many negatives attached to it.

Q. No matter what we call it, what's the best way for us to feel good about this stage?

A. Health is the most important indicator. If you're in good shape, it's a lot easier to feel good about middle age. We can't do at 50 what we did at 20, but we're much more aware of things we can do to maintain our physical and mental health. We know that physical exercise can help. An expert on cognitive ability and aging told me that physical exercise helps increase intelligence in old age. Which is amazing, when you think about it. If the fear of being fat doesn't get us into the gym, at least the fear of dementia might!

Next: Live a little and try something new. >>

Q. How we look in middle age clearly plays into our feelings about this time of life. What do we need to be aware of?

A. That it's useless to rail against the focus on physical appearance in our society. If there's the technology to make us look better – plastic surgery and such – people who can afford it are going to take advantage of it. And there are many studies showing that better-looking people are paid more and that people think better of them. This is an unfortunate aspect of human nature, but it's not confined to age. We need to emphasize the other aspects of middle age that are positive.

A. As you get older, you often develop more perspective. You're willing to take risks, to try new things. That can be everything from the decision to run a marathon or take up dance, to much larger things like changing jobs. The message I'm trying to share is that it's not too late.

Q. Why is the "midlife industrial complex," as you call it, critical for us to know about?

A. Whole industries such as advertising, film, TV and even print journalism celebrate youth. Look at Hollywood. It's a global giant. This affects us all. It's why you see people saying, "I'm experienced," rather than "I'm middle-aged," because putting it that way is much more positive. But I'm very curious to see how things develop in the next 10 to 20 years. There's going to be a huge demographic shift. The number of people in their 20s and 30s is going to shrink and become a much smaller population cohort.

Q. And middle age will become more the norm.

A. A much larger proportion of the workforce is going to be middle-aged. And those people will be in demand, one hopes, as the economy recovers.

Q. Yet they're also endangered in this economy.

A. It's the double bind. Bad economic times are bad for everybody, not necessarily the middle-aged in particular. We may hold on to our jobs. We're less likely to be fired, which is the good news. The bad news is that if we are fired, it's much harder for us to get another job.

Q. You include a chapter on middle-aged sex and urge us to "beware the tyranny of the normal." Meaning?

A. What's normal, anyway? This doesn't apply only to sex, although sex is one particular area where people are very concerned about falling into what's considered normal for this period of life. If you think, Oh my God, everybody just has the most amazing, fantastic sex life, then you worry about "what's wrong" with aging. Which is not to say that people don't have problems and that they shouldn't get attention if they do. We should just realize there's a very wide range of normal out there.

Q. We shouldn't be embarrassed about being middle-aged, you say. What's the message here?

A. If you don't give credit to the fact that, hey, we're 50, and this is the way 50 looks, and this is what 50 can accomplish, then we're not giving credit where credit is due. Chronological age is the least important in terms of how we actually live our lives. Where we are in our lives and how we're living them is what makes the difference.

Maureen Mackey is a writer and editor based in New York.