En español | On a recent Friday night at Café Montserrat, a hole-in-the-wall café in Buenos Aires steeped in the bohemian vibe of old Argentina, a female singer stood close to the tables, singing her heart out, paying tribute to the macho bravado of tango — the slang, the bitter sarcasm, the staccato strains of the guitar trio that accompanied her. Suddenly, she stepped aside and introduced guest singer Lucio Arce. 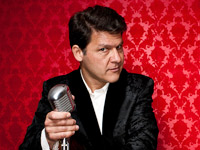 A tall man in his early 50s, Arce looked as if he’d just stepped out of a black-and-white tango movie from the golden era of Argentine cinema: hair slicked back with gel, sardonic grin, tailor-made 1920s-style beige suit, shiny two-tone shoes. Exhibiting the effortless charisma of a born performer, Arce grabbed an acoustic guitar and launched into “Trucha,” a deliciously dark tango about a loser whose girlfriend leaves him for another woman.

Arce quickly won over the men and women in the audience. They laughed at the wicked cynicism of the lyrics and applauded his vocal timing and impeccable guitar playing. Remarkably, the witty songs that sounded like tango classics were brand new: Arce’s own compositions.

What the audience didn’t know, however, was that this unassuming Friday-evening performance was part of a dream come true for Arce — a dream that he achieved by sacrificing everything else in his life, and daring to hope for the impossible.

Next: Life Transitions and Midlife Crisis >>

Years ago, Arce was as far as you can get from smoky Buenos Aires cafés. He was born in New York City, where his Argentinean parents were then living. They moved back to Argentina when Arce was one, and he returned to the United States at the age of 27.  He became a successful advertising copywriter and owned a house in the trendy coastal California town of Hermosa Beach. At age 40, he was beginning to consider steps leading to a comfortable retirement. But in 1998, he received an unexpected phone call: His ad agency had fired him.

“People at work thought I was going to have a nervous breakdown,” Arce recalls. “But it actually had the opposite effect. It was like the explosion of a middle-aged crisis that I had postponed for way too long. Suddenly, I found myself with a lot of free time. At the agency, writing advertising jingles was one of my specialties. Now that I was on my own, I picked up the guitar and started composing songs. All of them were tangos, the music that my dad would play at home when I was a kid.”

Next: A New Career: From Los Angeles to Buenos Aires >>

A New Career: From Los Angeles to Buenos Aires

Soon, Arce launched a tango career in Los Angeles. In 2002, he released his debut album, with a vocal cameo by Academy Award–winning musician Gustavo Santaolalla. He performed a number of local concerts, but quickly realized that it was only in Buenos Aires that his ambitious tango dreams could blossom to their full potential.

Three years later he took a leap of faith, selling his home and setting up a financial plan that would allow him a modest allowance. He purchased a small house in the neighborhood of his Buenos Aires childhood and devoted himself full time to music.

“I had never before contemplated something with so much clarity,” he says. “I knew that beginning a career as a singer at 45 was insane. I knew that the venture involved high risk. But I felt that there was no other choice. This was what I had to do. It was meant to be.”

Next: The Beauty of a Dream Versus Material Security >>

The Beauty of a Dream Versus Material Security

Says Loly Arce, the singer’s mother, who still lives in Los Angeles: “When you have a dream, it goes like that. If you don’t follow your true calling, it’s the recipe for unhappiness. Lucio had a beautiful home here, practically facing the ocean. Now all he has is a little house in the suburbs of Buenos Aires. But he has found an amazing group of fellow tango artists, and he is happy singing.”

Enrique Ahumada, a Los Angeles–based advertising copywriter who has followed Arce’s transition closely, agrees. “I always advised Lucio to exchange the material security that he had for the beauty of a dream,” he says. “Besides, the concept of security doesn’t really exist. I’ve seen Lucio recently, and he looks happy, fighting it out in the music biz, doing radio interviews and promoting his music.”

The Argentine mainstream has embraced Arce’s talent as a singer/songwriter. He has performed on television and radio, including Canal 7, the powerful state TV network, and the influential Continental radio station. But the achievement that planted him firmly inside the tango establishment was a series of concerts at the mythic Café Homero, a now-defunct venue where tango legends such as Roberto Goyeneche, Néstor Marconi and Adriana Varela performed regularly.

“Those performances established him as an original new voice that had something to say,” says Héctor Guyot, a cultural affairs editor with prestigious newspaper La Nación. “I could feel that the crowd connected instantly with Lucio’s talent for strong melodies, his loyalty to the tradition of performing tango with guitars and also the acid sense of humor with which he describes archetypical Buenos Aires characters.”

Next: Keeping a Dream Alive >>

It doesn’t pay well, but Arce is single and has no children. He supplements his income as co-owner of a school-supplies store, a corner shop located near a train station. The shop offers a small selection of books and does brisk business at the beginning of the school year selling notebooks and pencils.

“The concept of making a living through tango is always there,” he says over coffee and croissants at a nearby café. “I’ll never stop trying. It’s like playing soccer. As long as you can keep running, you’re still in the game.”

There’s no question about that. “Lucio has already secured himself a respected position in the local tango scene,” says veteran singer Hernán “Cucuza” Castiello, the organizer of a movement to bring the music back to the city’s barrios. “This is quite amazing, especially when you consider that he left behind both family and financial security. And he didn’t come here to perform ‘Caminito’ or ‘Cambalache,’ seeking easy success with the expected favorites. He arrived through the arduous path of the singer/songwriter, with a style that is experimental and favors irony and humor. Lucio’s artistic stance, in effect, is nothing short of heroic.”

1. Singing at Age 50+
2. Life Transitions and Midlife Crisis
3. A New Career: From Los Angeles to Buenos Aires
4. The Beauty of a Dream Versus Material Security
5. Keeping a Dream Alive