Join us May 24 to learn how Social Security can impact your retirement and how to calculate what you’ll get. Register today. 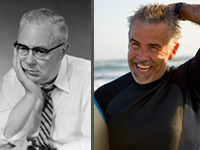 For More on Boomers at 65

En español |By contrast, people turning 65 today can go see the musical heroes that brightened their youth any day of the week, because they never really went away. Paul McCartney recently played the Apollo in Harlem. Keith Richards just released his autobiography. Aretha Franklin, Mick Jagger, Eric Clapton, Smokey Robinson and Paul Simon are all very much alive and kicking. Well, alive.

This is entirely different from my parents' era, when the heroes of the 1940s were mostly shunted to the side by the time they reached their 60s. In previous eras, when people reached retirement age, they grudgingly had to admit the world no longer belonged to them.

Boomers do exactly the opposite. If young people introduce something that they like — Starbucks, iPods, Facebook, the Fugees, Barack Obama — boomers immediately annex it.

It doesn't matter if these things were not specifically designed for them: When you're 77 million strong, and the generation that comes after you is just half the size, and you have all the money, you can colonize anything. Because you make the rules. And the one rule all boomers still live by was enunciated by Elton John 30 years ago: I'm still standing. Boomers will not leave the work force.

They take more and stranger vitamins than their parents. They jog. They power walk. They play tennis and racquetball and even basketball well into their 60s, whereas their parents threw in the towel on exercise shortly after the Marines took Iwo Jima.

There are two profound differences between retirement-age boomers and their parents at the same age. Well, three, if you include eating a lot more hummus. Actually, four if you include the fact that men of the Greatest Generation went gray gracefully, whereas boomer males go rust/auburn/blonde gracefully.

In fact, five, if you add in that our parents never attended writing workshops to learn how to "journal." The quintessential difference, of course, is that boomers have never accepted the idea that advancing age forces one to alter one's lifestyle. You're only as old as you feel, the saying goes, and boomers still feel 25. When they're 90, they'll still feel 25.

No matter how old they get, and no matter how harshly Father Time works his cruel magic, boomers will always act like it is still the day the Stones released "Jumpin' Jack Flash."

The second profound generational difference is that boomers are better prepared psychologically to do what they want in their golden years. Previous generations of Americans only went to Tuscany to fight Germans.

Boomers go there to see if the osso buco can possibly live up to the rave reviews they have heard. Boomers, who grew up backpacking across Morocco, are also better prepared to deal with the rigors of travel at an advanced age.

It helps that knee-replacement technology has advanced so much in recent years; a generation ago, when your hips and knees went, you were down for the count. Today you get yourself a new set of knees and walk straight up the Eiffel Tower.

On the negative side, they are less likely to embrace the joys of grandparenthood; being called gramps and granny is not what they envisioned the last time they saw Iggy and the Stooges.

They are also less likely to think of themselves as seniors. And they are less likely to stop playing contact sports after their third knee operation. Boomers also bike a lot more than their parents at a comparable age. Our parents didn't go in for Pilates, yoga, that sort of thing.

And our parents didn't spin. This is the one thing I really admired about my parents: No matter how fat and out-of-shape they got, they weren't going to make fools of themselves in spinning classes. Actually, I also admired them for whipping the Nazis and inventing Medicare and building this fabulous economy.

But my God, did they have to use so much linoleum?