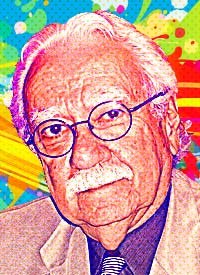 Al Martinez, 80, is a Pulitzer Prize – winning journalist and author with a dozen books to his credit. He now writes twice-weekly columns for the Los Angeles Daily News.

En español | Time stretched out before me like the track of a race waiting to be run, and I was ready to run it. I would continue working as a newspaper columnist for another 15 years, during which I underwent two open-heart surgeries, but this didn't stop me from fulfilling ambitions I had hosted for many years.

At 65, both my wife and I realized that even though the average life span had been extended, it didn't go on forever. We knew, for instance, that if we were ever going to undertake serious travel, we had better get going. Travel is hard in a lot of ways, and we were still in good enough shape to haul our luggage around, do a lot of walking, and endure the long flights required to get us wherever we were headed.

Unless you are independently wealthy, which we are not, travel requires an astute realization that you need money. What we had been saving for a rainy day became our travel fund. It was the key to our resurgence. We had already been on an organized tour to Europe that involved quick stops in London, Paris and Rome, but all that did was whet our appetites for more.

Our first post-65 trip was to Africa, and our most recent journey was to India. In between there were monthlong visits to Russia, China and Greece, soaking up the lore of ancient cities of the world, whose histories trail back to the beginnings of civilization. We also trekked through the rain forests of Panama and moved through the canal that changed the nature of marine transportation; we lazed in the sun on the island of Aruba and returned to London, Paris and Rome to explore them more closely.

The revival of our energy and goals also included my strong desire to write a novel. I'd already published 11 nonfiction books, but there were the last days of a dying newspaper that yearned to be fictionalized. So I went to it, obtained a contract from St. Martin's Press and two years later The Last City Room was in bookstores.

At age 80 the resurgence continues. Retiring from one newspaper, I answered the call of another and am writing two columns a week again. In addition, I created and conduct a local writers workshop and have begun writing two more books. Will I ever stop? In time, everything stops, but meanwhile, take it from me: It doesn't stop at 65.

More on Boomers at 65