The hand-painted sign over a stall in the open-air market of Westwego, La., proclaims the pride­­—and optimism—with which Ruth Ann and Rob Graves have offered customers a broad line of seafood for 20 years. 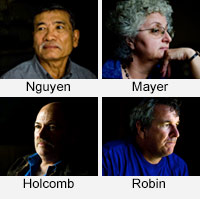 Shrimp, oysters, soft-shell crabs—the Graves' always had plenty on display, fresh from the Gulf of Mexico just down the Mississippi. But with the BP oil spill keeping fishing boats in port and limiting the catch, with customers scared off by talk of disease and pollution, the couple is struggling to save the business they’ve built.

"We never had a problem paying the bills," says Ruth Ann, an outgoing, upbeat woman with her blond hair in a wind-tossed ponytail. She wears a tank top and shorts in the summer sun and tells her story with matter-of-fact familiarity. "I’m just a person who has worked all my life and is losing everything."

Ruth Ann, 50, grew up in and around the market in Westwego, a small community south of New Orleans. By age 17, she was selling seafood herself at one of the modest stands set in a gravel lot on the side of the road. Her childhood home is just across the street.

Today she and Rob, 45, live just three blocks away in a house they have lovingly expanded and renovated in the past several years.

Even though the well has now been capped, business has not improved, and Ruth Ann doesn’t see that changing soon. "They sunk a lot of that oil," she says. "They took a little bit off the top, but they still have oil on the bottom that’s going to kill all the oysters.

"We don’t have fresh shrimp right now—no fresh oysters or soft-shell crabs. I think this is something that’s going to affect us for several years."

No fishing in these waters

The spill prompted the U.S. Department of Wildlife and Fisheries to close large areas of the gulf to fishing, shrimping and oyster harvesting, and Rob and Ruth Ann have watched their once-strong network of approximately 75 suppliers dwindle to about 16. The majority have gone out of business, and others have only limited hauls to go around.

The spill has also put the couple thousands of dollars in debt. In June, they were forced to sell two vehicles and some furniture, including their bed, to make ends meet. Recently they made a reluctant decision to put their house up for sale. If it sells, they’ll stay with Ruth Ann’s sister in Des Allemands, a town that is a 30-minute drive to the west.

It's July, and the Graves' stand is one of eight of the market's 16 that’s open for business. Ruth Ann is half hidden by a row of blue coolers that contain different sizes of shrimp.

A customer browsing the selection asks for a pound. Ruth Ann smiles and chitchats as she fills up a bag and wraps it in newspaper and butcher paper, then thanks the woman and waves goodbye.

Banking on the "every little bit counts" school of optimism, Ruth Ann has started adding chips and soft drinks to the stand, where she and Rob work seven days a week, 12 hours a day. They’re also importing frozen shrimp from Texas, and are still able to get turtle meat, alligator and lump crab meat from local providers.

But they are suffering from a public perception that seafood is simply not available. While health issues are a concern, says Ruth Ann, it doesn't help that other sellers keep saying in news reports that they've shut down.

"People think we're all closed," says Ruth Ann. "I get calls all the time, people asking me if we’re open. Of course we’re open! We've been through hell and high water."

No payment from BP

For more than two months, they’ve had a claim filed with BP to collect a hardship payout, but so far, no money has materialized. "I’m on my 15th claim person, and right now, nobody knows nothing," Ruth Ann says, laughing at the absurdity of it all. "They keep bumping me from person to person. I’m saying, ‘You try going three months without an income. Try it.’ Unless your family’s rich, it's impossible."

A customer comes over to buy some shrimp and asks Ruth Ann where she’s from. Ruth Ann proudly points, saying, "Across the street." She adds that her current home is nearby on Avenue B, and the woman says she used to own a house there, too. Ruth Ann hands her the shrimp and tells her the address.

"I used to be in that house!" the woman exclaims. "I’ve wanted to come by there and ask you to show me around."

Ruth Ann smiles. "We’ve got a huge house. We did a lot to it. You don’t see houses like ours much around here. Just stop by any night after 7 o’clock, and I’ll show you around."

She doesn’t mention that the house is for sale.

Molly Reid is an arts, culture and environment reporter based in New Orleans. Her work appears regularly in the Times-Picayune.