In the Protestant South I grew up in, Billy Graham was our pope. I mean that in the most respectful way. He was the beacon that directed our moral compass as children. When I strayed – and I did – the way back was through the strong North Carolina Piedmont cadences of the preacher man. 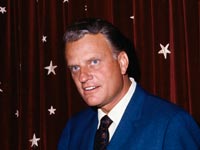 Billy Graham has been a multigenerational influence, especially in the South.

I knew the power that Billy had in our house. We had traveled to see him preach several times during the late 1950s. My daddy quoted him more than he did the Bible. It was close, but Billy won! The two of us would argue over faith and religion, and both of us used Billy's words in our defense. My mother taught Sunday school classes using his literature.

As I've watched Billy Graham accept illness and aging with peace, I can hear his song "Just as I Am" being sung in my ear, and I know that I owe part of my story and journey to this incredible preacher. He has touched many lives, and I am so glad that he is still part of mine.

﻿* YOUR TURN! Tell us what you really know about starting over. Email your essay of up to 400 words to whatiknow@aarp.org. Or mail it to "What I Really Know," AARP Bulletin, 601 E St. NW, Washington, DC 20049. Please include your name and a phone number or email address.

You may also like: Are heaven and hell real?