They were dignified men who did undignified labor. They made beds and cleaned toilets. They shined shoes, dusted jackets, cooked meals and washed dishes in cramped and rolling quarters.

Yet the thousands of African American men who rode the nation’s railroads as Pullman porters between 1867 and 1969 changed history. In the face of adversity and racial prejudice, they created the first labor union for African Americans. They helped build the civil rights movement in the 1950s and ’60s, and exemplified the possibility of upward mobility for black males long before Barack Obama took up residence in the White House. 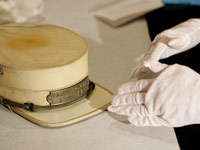 A textile conservator examines a Pullman railroad porter hat dating from the 1930s.

“These are ordinary men who did extraordinary things,” noted Lyn Hughes, a Pullman porters historian, in a tribute to five former porters held this week at the Oakland, Calif., Amtrak station as part of Black History Month. As the award ceremony took place, passenger trains could be heard whistling and chugging to a stop on nearby tracks.

“You knew who they were,” Hughes said. “They dressed well, they carried themselves well. They were men of purpose and principle,” whose standard of excellence became the measure by which others were judged. Hughes, founder and curator of the A. Philip Randolph Pullman Porter Museum in Chicago, has spent years compiling records of every porter, dining car worker and maid who served on the railroads into the book An Anthology of Respect.

Still the best-dressed men in any train station, none of the retired porters would dare speak with such immodesty about themselves. “It was a job, and you got used to it,” said Lee Gibson of Los Angeles, who started working for the Union Pacific Railroad in 1936 and still wears a crisp white shirt, tie and stylish dark suit at age 98. “You would get up each morning and do the best job you could and accept whatever comes. But it was a steady job and we got pretty good money. Got to travel the country, and the work wasn’t too hard. It was kind of fun, but you know, it was a service job.”

Like many Pullman workers, Gibson grew up in the South, in Louisiana and Texas, and was introduced to railroad work by a church deacon after moving to Los Angeles in 1935. “He carried me down to the superintendent’s office and he hired me right then. He told me, ‘You ought to make a good porter for us,’ so I went to work.”

Gibson thinks his work as a Pullman porter allowed him to stay married 76 years, until his wife passed away three years ago. “We had five days on the railroad and five days off. So by the time the wife was tired of you, you were gone. And by the time you got back, she was happy to see you again,” he said with a chuckle.

Troy Walker, 90, was born in Oklahoma and was working in a bar at Union Station in Kansas City, Mo., when he learned he could get work on a Union Pacific dining car. “It was a good job. You made a lot of your money in tips because the salary wasn’t great. But we served first-class meals, and because we were in the dining car you got to meet a lot of movie stars and business people.” He remembers wearing tuxedo pants, a white dinner jacket and a black bow tie while waiting on his customers, who included director Orson Welles and actress Elizabeth Taylor. “In my era, it was about the only good job a black fella could get.” Walker, who stayed with the railroad for 37 years before retiring in Seattle, attended the Oakland ceremony with fellow honoree Thomas Henry Gray, 71, a third-generation railroad porter.

While the Pullman porters were held in high esteem in the black community, their historical legacy is often overlooked.

Chicago industrialist George Pullman began recruiting black men as porters on his new luxurious rail sleeper cars, which revolutionized train travel, just after the end of the Civil War. He was looking to hire men for his rolling hotels who were dignified and diligent, and who epitomized Pullman’s vision of safe, reliable and invisible servants. But the jobs came with a price. Historians note that for over a century, in the intimate confines of railcars that crisscrossed America, a Pullman porter had workloads lasting sometimes 400 hours per month and encountered indignities and outright humiliations from passengers. Most white customers called their porters “George” after Pullman, or simply “boy.”

For a time in the mid-20th century, more black American males worked for the railroads than anywhere else. The good pay and steady work made a Pullman uniform a status symbol for generations of African American families hoping to gain economic mobility. Supreme Court Justice Thurgood Marshall and his father were both Pullman porters. So was the father of former San Francisco Mayor Willie Brown, as well as the father of Tom Bradley, the first black mayor of Los Angeles. Filmmaker Gordon Parks and activist Malcolm X also served as Pullman porters.

The porters were also inextricably linked to the union and civil rights movements. After contentious battles both within the black community and against management of the Pullman company, the Brotherhood of Sleeping Car Porters, founded by A. Philip Randolph, won recognition in 1937 after a 12-year campaign. The union’s organizing slogan was “Fight or Be Slaves.”

In December 1955, when Rosa Parks refused to sit in the back of a Montgomery, Ala., municipal bus and was arrested, E.D. Nixon, a Pullman porter who headed the local branch of the NAACP, helped organize the pivotal Montgomery bus boycott. Randolph and one of his chief lieutenants, Bayard Rustin, were also the chief architects of the 1963 March on Washington. “They learned to organize by standing up for themselves and organizing a union,” Hughes said. “And perhaps unintentionally, they helped organize the civil rights movement, too.”

The porters disappeared in the 1970s when Amtrak took over the trains and porters became “attendants.” “The white people they hired didn’t want to be called ‘porter’ and they didn’t want to wear the uniform,” Walker explained.

But to train buffs like Brian Rosenwald, who used to hang out in Chicago’s Union Station as a teen and now is the chief of product management for Amtrak, the contribution of the Pullman porters remains vivid.

“You know it’s just cold steel,” Rosenwald said. “But these men gave the trains their soul.”

Michael Zielenziger is a writer based in Oakland, Calif.