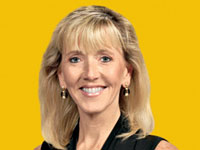 Here's what I remember about Aunt Lil:  she never forgot my birthday. Every year a card would arrive promptly on August 14. The colorful Christmas stockings she knitted for my brothers and me made holidays more magical. And when my dad got sick when I was 12, Aunt Lil was the one who told me he wasn't going to make it.

Here's something else I remember, and it haunts me: when Aunt Lil had a debilitating stroke that confined her to a nursing home, I never once went to visit her. I can come up with all kinds of reasons why—I was busy trying to find myself in New York City; she had a stepdaughter to take care of her; if she'd wanted to see me, she'd have asked. But the truth is, I don't recall it ever crossed my mind that I should get on a plane and go to her. I can't fathom why, given how clearly I remember her pained words each time I'd call to ask how she was: "I'm just awful."

Sometimes you get a second chance in life to correct mistakes, and sometimes you don't. This theme runs through many of the films we've selected for 2010's "Movies for Grownups® Awards". Whether it's the true story of South African leader Nelson Mandela's resolve to forgive his enemies while using rugby to unite his country (Invictus), or the gritty tale of a washed-up country singer who learns too late what his carousing has cost him (Crazy Heart), or the sad journey of a woman who spends her life running from a childhood mistake (The Burning Plain), the lesson is the same: by forgiving others and yourself, you can keep the past from ruining your future.

I didn't get a second chance to make things right with Aunt Lil. She'd led an unlucky life for many of her 70-plus years, and she deserved better. A schoolteacher, she married late and was widowed early. She never bore children, but she raised a stepdaughter. Later she moved back to my grandpop's home in Pennsylvania to care for him until he died at 96. It's no wonder that whenever we visited her there, she didn't seem like much fun.

Then I grew up. And on a weekend trip to Sarasota, Florida, where Aunt Lil had moved after Grandpop died, I saw another side of her. A scratch golfer, she seemed fit and strong and happy. We went out to dinner one night, and for the first time I got to know her as a modern woman with passions, opinions, and dreams. She confided that she was attracted to a man who wasn't paying her as much attention as she'd have liked. We commiserated about that, gossiped about family, and talked about my budding career—for three wonderful hours.

That was the last time I saw my aunt Lil. It's the memory I keep with me: she and I, sharing a meal and a glass of wine in a candlelit restaurant, finally getting to know each other. She was a remarkable woman who, by example, taught me lots of lessons over the years. But the most important one was this: make things right with the people you love, while you have the chance.