En español | Luz Marina Little, a spiky-haired, fast-talking Colombian, has lived in the United States for more than two decades. She's raised two children here and held down a string of jobs in factories and stores.

Though she's managed to navigate life in her adopted country using halting English, her language limitations have always weighed on her. Over the years, Little bought English-language textbooks, practiced her pronunciation at home and even signed up for a few classes. 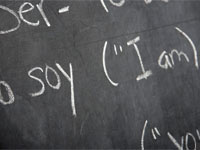 But the demands of work and children always seemed to hinder her hopes of learning English properly – until now. Little, 65, has completed three of six levels of English as a Second Language (ESL) classes at Wake Technical Community College in Raleigh, North Carolina. She plans to stick with it.

"I come to class now because I was finally able to find the time," says Little, who now works just part-time. Little is one of more than a million students nationwide taking ESL classes at colleges, community centers and other locations. And the number of older students in such classes is growing.

In 2005, the most recent year for which figures are available, more than 300,000 students ages 45 and older had taken an ESL class in the past year. [Editor's note: there are no figures exclusively for Spanish speakers] That's more than double the number of a decade earlier, according to the U.S. Department of Education.

Next: ESL benefits across a lifetime. >>

Those who learn English late in life may face unique challenges, but they also gain wide-ranging benefits. "The benefits of language learning are going to extend across a lifetime," says Donna Kinerney, instructional dean for English for speakers of other languages at Montgomery College in Maryland.

Some of those benefits are financial, such as better jobs for those still in the workforce and greater ability to understand banking, savings, investments and insurance. Others are less tangible, such as building tighter bonds with grandchildren or keeping the brain sharp. Studies show that learning something new can increase concentration and memory skills. In addition, according to a recent study, being bilingual from early on can stave off dementia by more than four years.

The two most commonly cited reasons for taking ESL classes don't expire with age: a Department of Education survey found that more than 90 percent of ESL students said they signed up to improve how they felt about themselves or to make it easier to perform day-to-day tasks.

Granted, by starting later in life, Little missed out on some advantages of learning English. Her career suffered. A dental hygienist in her native country, her credentials weren't accepted here and she didn't have the skills to take college classes in English. She ended up working in blue-collar jobs. With her children's teachers, she had to rely on translators to communicate. And she felt lost when she had to talk to English-only speakers after she and her husband, who spoke English well, divorced.

But Little says the confidence and skills she's gained from ESL classes now help her daily. Chatty and energetic, she enjoys conversing in English with supermarket patrons where she works part-time serving food samples, and with neighbors and friends. "It's important because I want to express myself," she says. "I speak, and they understand."

In her ESL classes — taught entirely in English — 60 percent of the students are Hispanic, and 22 percent are 45 or older. On a recent morning, small groups drafted sentences using comparisons, mastering when to use "more" and when to add "-er" to the end of words. "Hamburgers are more popular than hot dogs," Little and three other women in her group wrote. "Salad is healthier than pie."

It's these nuts and bolts of the English language that Little says she's missed over the years, even as her vocabulary grew and she began to make herself understood.

Next: What do educators have to say? >>

Her teacher, Viorica Dolganiuc, says older students often show more interest in these finer points than younger students do, asking more questions to make sure they've understood each concept. "They're a little bit more detailed," she says. "They want to make sure that they know [the concept] because they know they've been making these mistakes."

Righting such linguistic wrongs can be a powerful motivator, says Judy Sparanese, president of the South Coast Literacy Council, a 40-year-old, all-volunteer program based in Mission Viejo, California. The free program uses about a dozen donated sites for classes, including several senior centers.

Sparanese says more than half her students know some English. Many come to improve what they consider embarrassing accents; others, often recent immigrants, want to communicate with their grandchildren. "They live with their [extended] families and take care of the grandchildren, and the grandchildren don't speak the native languages," she says. "That's a very motivational factor."

In fact, older ESL students may be more motivated than their younger classmates, educators say. And that's just one of a host of advantages they bring to the classroom. Older students also tend to devote more time to their studies and thrive working in groups. They often form friendships with other students, a reason many tend to stay in classes longer.

But even more important, says Montgomery College's Kinerney, is that older adults bring a lifetime of experiences upon which to build their language skills. She says life experiences act like mental "hooks" where students can "hang" new information for future reference; this ability to make connections can more than make up for age-related memory loss. "The more experience that you have, the easier it's going to be for me to teach you," says Kinerney, who oversees about 7,000 ESL students.

But older ESL students might also confront pitfalls. Hearing or sight loss can hinder classroom learning, and older students are often embarrassed about making mistakes, an important part of language learning, educators say. Among students who speak some English, errors they have made persistently can "fossilize" over time, hardening into habits that are difficult to break, educators say. But breaking those old habits and learning new ones is worth the effort.

Juan Diaz, 50, has wanted to learn English since he moved to South Florida from Honduras 18 years ago, but pronunciation has always tormented him. Now the landscape maintenance business owner jokes that he's returned to first grade: He's spent about five months working on Level 1 English, the most basic level.

He'd tried other classes, but they didn't get him far enough. This time, a tutor affiliated with the national group ProLiteracy is working with him and his wife in private sessions for free. Diaz works six days a week, but says his Sunday tutoring sessions are worth giving up his one night of leisure: "Any time you can learn is the time to learn."