Want to play the banjo like Steve Martin, the clarinet like Benny Goodman, or just hold your own in a community orchestra?

The nonprofit New Horizons International Music Association can help people age 50 and older learn to play an instrument or revive a skill learned long ago in school. There are 7,000 members in 182 orchestras, bands and choruses in 41 states and overseas, fulfilling their musical dreams in New Horizons programs. Once a week, budding musicians meet in groups for lessons for an hour and then play together for the second hour. 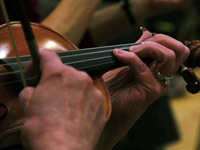 The groups get together at schools, colleges, recreation centers, church basements and senior centers. And this year, informal celebrations are planned across the country to mark New Horizons' 20th anniversary, including camps and concerts.
Music makes the day shine for many participants. "I wouldn't have been able to progress to the level I have reached if the program didn't exist," says Felecia Linton, 52, a program assistant at the University of Alabama School of Law who's been playing the violin for five years. "I've learned a whole lot, and I've been meeting lots of new people."

Judi Hasson is a freelance writer in McLean, Va.