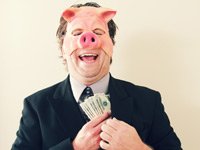 Should jobless workers who had seven-figure incomes collect state benefits

People with million-dollar incomes pay into unemployment insurance like everyone else. But surely they never collect, right? It turns out they sometimes do.

A Congressional Research Service study has found that nearly 2,400 tax filers reporting annual income of $1 million or more tapped the government for nearly $21 million in unemployment benefits in 2009.

That had many lawmakers raising questions and proposing legislation that would restrict or tax unemployment benefits of jobless workers with high incomes. Sen. Tom Coburn, R-Okla., has introduced a law to prohibit federally funded unemployment benefits to anyone who had at least $1 million in income in the year before filing a claim. The Ending Unemployment Payments to Jobless Millionaires Act has wide support in the Senate and has been referred to the Senate's Finance Committee. As of now, no income limits exist on the jobless insurance.

The $1 million-plus earners who received unemployment in 2009 accounted for just 0.02 percent of the roughly 11.3 million tax filers who declared unemployment benefits as income that year.