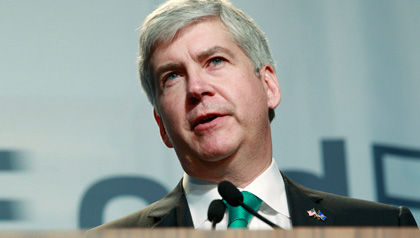 Photo by Jeff Kowalsky via Bloomberg

Michigan will avoid potentially deep cuts to its Medicaid program next year thanks to a tax change that was supported by AARP Michigan and passed by the state legislature.

A 1 percent tax will be levied on almost all paid health insurance claims in the state starting Jan. 1. Insurers said the tax will be passed on to their individual and group-plan customers.

The tax will preserve $1.2 billion in state and federal funding for a variety of health services to older people, the poor and people with disabilities. It represents about 10 percent of Michigan's $12 billion annual Medicaid budget.

"Failure to pass the claims tax would have meant devastating cuts to Medicaid, which provides long-term care for Michigan's seniors and health care for children in the state's most vulnerable families," said Eric Schneidewind, AARP Michigan president.

Gov. Rick Snyder, R, signed the legislation, which his administration had sought to address objections by the federal government to the state's current Medicaid financing structure.

The current structure is a 6 percent tax on Medicaid managed care plans, mostly HMOs. The federal government requires a state's Medicaid match money be raised from a broad-based levy, not a narrowly targeted tax, and federal officials had signaled that Michigan's HMO tax was too narrow. The 6 percent tax will be eliminated after the new tax goes into effect.

The new tax is expected to generate the same amount of revenue as the 6 percent tax on Medicaid managed care plans, according to reviews of the legislation by the House and Senate fiscal agencies.

The $400 million generated by the tax each year is used as a required match for about $800 million annually in federal Medicaid funds. The federal government pays about two-thirds of Michigan's Medicaid costs.

Health insurers, self-funded employer plans and third-party administrators will pay the 1 percent tax. Insurers are allowed to pass on the cost of the tax to individual and group customers, but the law caps the tax at $10,000 for claims exceeding $1 million.

Helen Stojic, a spokeswoman for Blue Cross Blue Shield of Michigan, the state's largest health insurer, said the tax will cost the company and its customers more than $100 million a year.

Insurance claims paid by Medicare and the Department of Veterans Affairs and those of federal employees will not be taxed.

Also, out-of-pocket expenses by individuals, such as copayments, coinsurance and deductibles, will not be subject to the tax.

Roughly 1.9 million Michigan residents — nearly 20 percent of the population — are covered by Medicaid, according to the state Department of Community Health.

"This broader base permits a much lower tax rate and is the most equitable policy," said Rick Murdock, executive director of the Michigan Association of Health Plans.

Rick Haglund is a writer living in Birmingham, Mich.

Want to make a difference in your state and community? AARP Michigan is recruiting volunteers to help with advocacy, fraud-fighting, food drives and other programs. Call Careena Eggleston, volunteer coordinator, 517-267-8900 or 1-866-227-7448 toll-free.