An $8,000 first-time home buyer tax credit intended to spur the economy apparently did a lot more than help people looking to put a roof over their heads.

It turns out that the federal government paid out a whopping half-billion dollars to taxpayers who claimed the credit but didn't qualify for it, according to a recent government inspector general's report (PDF).

Most of the money flagged by the audit — roughly $326 million — went to 47,576 individuals who most likely had previously owned a home, since they had claimed mortgage interest or other similar deductions on past tax returns.

Others claimed the credit even though they bought their home before the tax credit became available, and in thousands of cases there were two people claiming the credit for purchasing the same home. Some also cashed in on the program even though they were in prison, the tax auditor said. 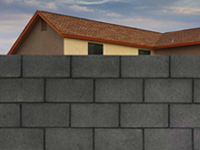 "In our opinion, the [Internal Revenue Service] needs to take a much more timely and proactive approach to prevent fraudulent claims for refundable credits," indicates the report by J. Russell George, the Treasury inspector general for tax administration. "The IRS should not wait to take action, as it did with the home buyer credit, until after fraudulent claims have been processed."

Officials from the IRS say they worked hard to quickly implement a large program, which provided almost $29 billion in tax credits to more than 4 million Americans.

And to their credit, not everything slipped under the IRS's radar. Among the improprieties the agency did catch: 96 tax filers claimed the credit even though they were under age 18, making it highly unlikely that they bought a home.

"Where there are questionable claims, the IRS has moved aggressively and successfully blocked or denied nearly 426,000 questionable home buyer claims," the IRS said in a statement. "The IRS continues to audit claims as warranted and recapture credits that were improperly paid."

Michelle Diament is a frequent contributor to the Bulletin.