AARP Rewards is here to inspire you to learn and prepare for whatever life has ahead! Take a look. 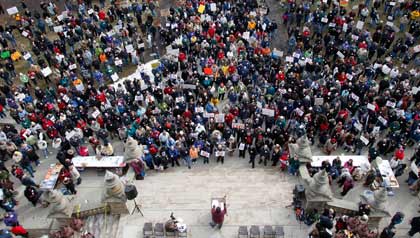 Gov. Rick Snyder’s proposed tax on public pensions to help pay for a business tax cut drew protesters to a rally in March. AARP Michigan called the proposal 'a tax increase on every senior.'

To Sally Barnett, retired after 37 years as an educator, the idea of taxing her pension just wasn't fair.

"To make the change for people already in the retirement pipeline is an issue of promises broken," said Barnett, 64, of Livonia.

But if Gov. Rick Snyder's budget proposal (PDF) is adopted by the state legislature, Barnett would be among the state's retired teachers, public health nurses and firefighters whose state income tax returns for 2012 could for the first time include a tax on pension income. The money would partially fund a tax break for businesses that would cost the state nearly $1.8 billion in lost revenue, according to the Michigan House Fiscal Agency (PDF).

Current Michigan law exempts all public-sector pensions from the 4.35 percent state income tax, and private pension income is exempt up to $45,120 per person, up to $90,240 for joint filers; the cap is indexed to inflation.

The Republican governor, a former corporate executive, has vowed to turn around one of the nation's most anemic economies and close the state's budget deficit of about $1.4 billion.

Under the governor's proposal, people younger than 60 (born on or after Jan. 1, 1953) would pay tax on retirement income, except for Social Security and military pensions.

The current tax structure for public and private pensions would not change for people born before Jan. 1, 1946.

AARP Michigan says it's unfair to ask some retired people to pay $435 for every $10,000 in pension income while businesses get a tax break.

"We were always willing to look at shared sacrifice," said AARP Michigan President Eric Schneidewind. But "every single penny of this increase would go to fund the largest business tax cut in our state's history."

Among the 41 states with income taxes, Michigan is one of only 10 that do not tax most pension benefits, according to the National Conference of State Legislatures (PDF).

The governor and others have said that amid a fiscal crisis, it's only fair that all of the state's residents pay taxes on their income, no matter the source.

Michigan, which lost 790,600 private-sector jobs from 2000 to 2010 — the most of any state, according to federal figures — is striving to make itself more attractive to employers.

AARP and other opponents of the tax increase counter that the measure would unfairly burden fixed-income retirees already beset by rising food and fuel prices, diminished community services and skyrocketing health care costs.

"When you cut spending, it's a more noticeable drag on the economy," said Elizabeth McNichol, senior fellow at the Center on Budget and Policy Priorities, a nonpartisan think tank in Washington, D.C.

Snyder has asked the legislature to approve the budget by May 31.

Melissa Preddy is a writer living in Plymouth, Mich.