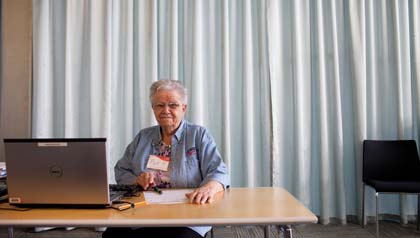 Phoenix resident Lois Swanagan was worried about finding the money to pay her property taxes. Then a neighbor told Swanagan, an 85-year-old widow, about the Arizona property tax credit program that refunds up to $502 of rent or property taxes paid by low-income people 65 and older.

It was a lucky conversation.

Swanagan hadn't filed tax returns for several years because her income was below the filing threshold. But with Perazelli's help in 2010, she filed a state form that non-filers can use and was able to get about $500 through the property tax credit program.

Swanagan is one of more than 47,000 Arizona residents who use Tax-Aide each year.

"Seniors have lost their homes because they weren't able to pay their property taxes."

Like Swanagan, older Arizonans whose yearly incomes are below $3,751 for singles over 65 and $5,501 for couples, not counting Social Security income, may be missing out on the property tax credit program because they aren't aware of it, Perazelli said.

"It's not on the radar of many who retire here because it is a state refund and not widely publicized," he said.

Tax-Aide is targeted at low- to moderate-income people 60 and older, although it is open to anyone. Volunteers are certified by the Internal Revenue Service after attending training sessions and passing three tests.

About 1,200 Arizona Tax-Aide tax counselors, greeters and schedulers are working until the April 17 federal tax-filing deadline at about 80 sites in senior centers, libraries, shopping centers, colleges and churches, Perazelli said.

Next: What documents should you bring? >>

Many of the Tax-Aide sites have walk-in service, but some sites take appointments to reduce waiting, said Fran Molleur, 69, of Gilbert, volunteer and communications specialist for the Arizona program.

Clients are asked to bring:

Most tax returns take an hour to prepare, said Alberta Sigman, 71, of Mesa, a volunteer tax preparer for 15 years.

Carol Lyons, 69, of north Phoenix, has been a Tax-Aide client for six years. She worked in accounting for 40 years, so Lyons is good with figures. "But the law is much more complicated than it used to be. It would be so easy to make a mistake on your own."

She even persuaded her 33-year-old grandson to volunteer. They work as a team. She answers his questions about tax preparation; he answers hers about computers.

Some sites offer bilingual help. To find a Tax-Aide location or to find out about volunteering for the 2013 tax season, call toll-free 1-888-227-7669 or visit aztax-aide.org.

You may also like: Frequently asked federal tax questions. >>

Maureen West is a writer living in Phoenix.