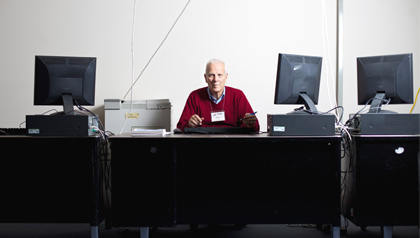 Like many people, Dorothy Taylor of Madison would rather entrust her tax returns to an experienced professional than tackle them herself. But when she discovered her longtime tax attorney made errors preparing her form, the 79-year-old widow began losing confidence.

In 2000, Taylor heard about the AARP Foundation Tax-Aide program, a service with a focus on low- to moderate-income people age 60 and older.

She said she found Tax-Aide volunteer Paul Swanson to be conscientious and extremely knowledgeable — particularly about a sizable deduction her lawyer had missed.

Just as important to Taylor was the patience Swanson showed when gathering her financial information and explaining relevant portions of the tax code.

"He really made me feel at ease," said Taylor, who more than a decade later continues to make annual appointments with Swanson.

Thanks to Swanson and the efforts of more than 700 other volunteers in Wisconsin, Taylor's experience is replicated at 140 sites. Last year Tax-Aide helped roughly 60,000 Wisconsinites.

While the use of computer software at most sites makes preparation faster than ever — clients typically walk out with a completed state and federal return within an hour — the confidential program continues to emphasize accuracy. Volunteers go through a three-day training program and must pass IRS certification exams each year. In addition, each state and federal return is double-checked by a second certified tax counselor before it is filed.

As a result, volunteers often identify credits and deductions to which clients didn't know they were entitled.

All too frequently, Swanson said, residents doing their own returns overlook potential tax breaks such as the homestead credit or deductions for large out-of-pocket medical expenses.

For Swanson, the joy of making tax time a little less stressful for his clients is what keeps him coming back year after year. A retired high school math teacher who had worked part time for a tax-preparation business, he joined Tax-Aide in 1997 at the suggestion of a former colleague.

Swanson, 70, has since taken on leadership roles with the program — he's the state coordinator and site captain for Wisconsin's largest Tax-Aide location in Madison. In addition, he still spends up to six days a week preparing returns during the tax season.

"I enjoy doing taxes, and I enjoy working with people," said Swanson, whose dedication earned him AARP Wisconsin's 2011 Andrus Award for Community Service, an honor given to the state's top volunteer each year.

Many Tax-Aide counselors, including Bob Short, 60, of Sun Prairie, didn't have a professional tax background prior to getting involved. But with several years of experience helping family members with their returns, Short thought the program would be the perfect way to help others during his retirement.

The former information systems professional found himself preparing returns up to 30 hours a week as a Tax-Aide volunteer.

Now in his fourth year with the program, Short finds that helping clients reduce their tax burden is still one of his greatest passions.

"People have to know nearly as much to prepare one return as they do to prepare a hundred. So learning all the changes in a given year is a daunting task for most people," he said. "I just feel like I'm providing some help for these folks."

Dan Kurt is a writer living in Wauwatosa, Wisc.