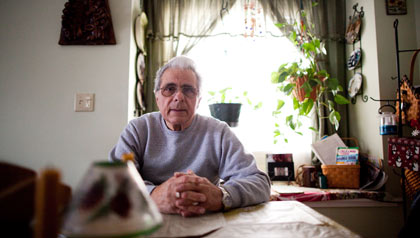 Phil Corbesato, of Shelton, relies on the AARP Foundation Tax-Aide program to make sure his returns are filed properly. About 30,000 Connecticut taxpayers used the free service last year.

Phil Corbesato, 69, under went a life change in April when he got married. As he gets ready to file his 2011 tax return, he knows it will be much different from his last one. "I have to find out if it's more advantageous to file as a married couple or individually," the Shelton resident said.

But he's not stressed about filing his tax returns because, for the last two years, his forms have been prepared for free by an AARP Foundation Tax-Aide volunteer.

The program focuses on helping low- and moderate-income people, with special attention to those over age 60.

"The majority of our clients are seniors. But because of the economy, we are seeing younger people and unemployed people. We don't turn anyone away," said Linda Avery, 47, a volunteer tax preparer from Wethersfield.

Avery, who has been a Tax-Aide volunteer at the Wethersfield Senior Center for four years, said people who use professional tax preparers often pay "$150 to $300 to get a simple tax return done. We can do it for free. People come back year after year."

Federal and state tax laws frequently change, and Connecticut's could get particularly tricky this year because of a cut in the state property tax credit and a new earned income tax credit.

In addition, some tax exemptions have been eliminated, and the number of tax brackets has increased from three to six.

But Tax-Aide clients can rest easy because by the time tax season begins, Tax-Aide volunteers will have undergone several days of training and passed three IRS certification tests and an ethics exam.

Dan Arnold, 74, Tax-Aide coordinator for both Connecticut and the New England region, said grateful clients who use the service often reach for their wallets or checkbooks.

"We are prohibited from accepting money," the Bloomfield resident said. "Sometimes people come in with plates of cookies. We can accept that."

Tax preparers are generally available from Feb. 1 through the mid-April filing deadline, Arnold said. They operate at more than 90 sites throughout the state, mostly at senior centers, Arnold said.

About 95 percent of the returns are submitted electronically, which means people get their refunds more quickly.

Most completed in two hours

"We just ask individuals to come in with their tax information [W-2 or 1099 forms] and last year's tax return. The returns generally take about two hours for us to prepare, and every return is reviewed by a second tax preparer before they're filed," Arnold said.

Some Tax-Aide centers take appointments, while others serve customers on a first-come, first-served basis.

"Sites are open during the week, during the day, and that's when we see a lot of seniors," Arnold said. "They come because they can't handle this stuff anymore. They may have done it [tax preparation] when they were younger."

Corbesato agrees. "I wouldn't even attempt it myself. I don't want to take the chance.

"My preparer worked for the IRS. I was very fortunate to get a gentleman with his experience," he said.

Most clients will get refunds, Arnold said, "so it's a positive experience because you like to give people good news. Sometimes we tell them, 'You're withholding too much from your pension,' and they'll say, 'I don't want to change anything. I like getting refunds.' "

Bob Moseley is a writer living in Shelton, Conn.