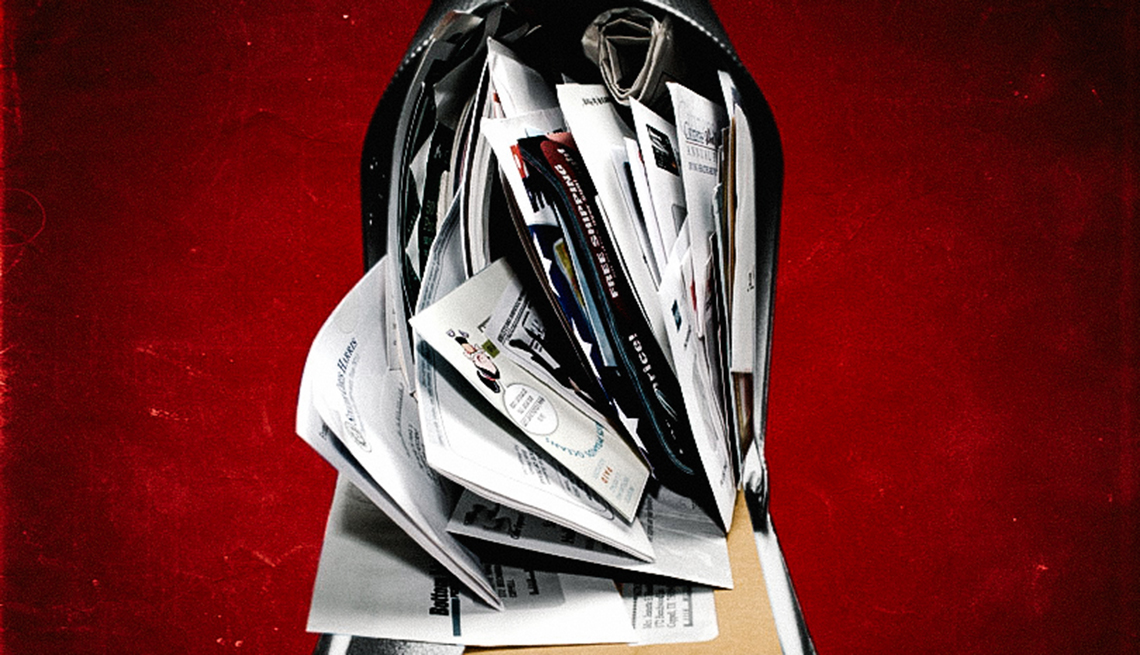 Like thousands of other retirement-age Americans who have been contacted by debt collectors, Kuen-An Liu didn't owe anything. Someone named David had used Liu's phone number to fraudulently obtain a credit card. And after $8,500 in unpaid charges were run up, the 67-year-old AARP member was called to settle the tab.

"On the very first call," Liu says, "I gave proof I wasn't David. But they just kept calling, nearly 60 phone calls over three weeks, and sometimes as late as 8:58 p.m., saying they were allowed to call until 9 p.m." The harassment ended only after Liu hired a lawyer and sued.

1. Get details about debt
Ask for the collector's license number, company name, address and phone number. If the collector refuses to provide this information, assume it's a scam. Visit the Consumer Financial Protection Bureau for other signs of bogus collectors.

2. Watch credit reports
When reviewing the three freebies that you can receive each year at AnnualCreditReport.com (get one from each credit reporting firm, spaced out over several months), look for unrecognized debts in your name, as well as inquiries by collectors or creditors.

3. Write letters
Visit the Consumer Financial Protection Bureau's website for sample letters to help you get more information about the alleged debt, dispute it and stop contact from collectors. Send it by certified mail and with "return receipt" to the collector and creditor after initial contact, with copies to the CFPB, the FTC and your state attorney general.

4. Know what to expect
For alleged credit card debt, insist on written proof that you owe it — such as statements detailing the unpaid charge. For medical debt, get a statement or invoice outlining services, dates and names of doctors, and cross-check that with Medicare, private insurers and providers for payment or reimbursement status; collectors may call before payments are processed.

5. Know your rights
Get details from the Consumer Financial Protection Bureau.

Tony Figlio, 70, received 20 phone calls over a two-day period for a debt that wasn't his. Even after several letters and calls to the original creditor, "the debt collectors continued harassing me until I finally got the Consumer Financial Protection Bureau involved."

Quiz: Are you an easy target for scammers?

It's an outrageous yet familiar story: Nearly half of the 8,700 complaints about debt collections that older people filed over a 15-month period to the CFPB's Office of Older Americans report the same offense — unrelenting attempts to collect money that they don't owe. Overall, debt collectors accounted for 110,000 complaints to the CFPB from July 2013 through December 2014. The Federal Trade Commission also says it receives more complaints about collectors than about any other industry.

The big question: As debt collectors try to recover some $756 billion in debt, how many pay what they don't really owe? The CFPB's Nora Dowd Eisenhower says there are no firm estimates. But based on debt collection complaints by those age 62 and older, here are the most common tactics used to squeeze payment from the wrong person.

Although it's commonly threatened by unscrupulous collectors, Eisenhower says, this cannot be done legally for private debts — only for delinquent state or federal debts such as unpaid student loans, taxes and government-backed mortgages. Unpaid alimony or child support could also be deducted from Social Security benefits, but Supplemental Security Income (SSI) benefits cannot be garnished for any debt.

See also: Can the IRS really do that?

"The year following the death of a longtime spouse can be a very [emotionally] vulnerable time," Eisenhower says, and this means widows are frequently targeted to pay alleged medical debts. Another common complaint: repeated attempts to collect on debts allegedly owed by deceased family members.

These include repeated calls, offensive language and threats to publicly shame, says Eisenhower. "The biggest mistake is to react under pressure. You need to step back and verify the debt before you pay." Yet most don't, says consumer attorney Sergei Lemberg of Stamford, Conn., who has recovered some $10 million for consumers falsely accused by collectors of owing debt. Some pay duly owed expired debt because they are unaware of the statutes of limitation — generally two to 10 years, depending on your state, after which collectors can't legally sue consumers for unpaid debt.

"Others pay debts they never owed simply to end the nonstop phone calls," Lemberg says. "And when collectors get it wrong, they just keep calling." Alex Szeto of ACA International, a collection industry trade group, says mistakes may happen: "There certainly can be instances in which the debt collector unknowingly collects from the wrong consumer." He says mistaken identity cases result because many consumers won't provide identifying information over the telephone. No surprise there — they wisely fear identity theft.

But if you're wronged by a collector, Szeto says, the trade association won't step in and set things right. That's up to you. So, if contacted about debts you don't owe, file a complaint with the CFPB as well as your state attorney general.