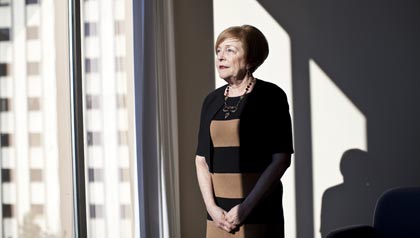 When her mother was swindled by a "friend," Peggy Friedenberg, 66, of Richmond, intervened. She backs AARP's efforts to pass a new law to protect older people from this kind of financial manipulation.

Peggy Friedenberg wondered why a woman who appeared at her mother's Richmond condo building was willing to cook, clean and drive her mother on errands around town.

Finally, after two years, Friedenberg found a check that her mother wrote to an attorney.

Her mother tearfully confessed: "I'm not sure what I signed."

Those papers transferred the deed on her mother's condo to the woman and created a new will with the woman as a major beneficiary.

Experiences such as this are heartbreaking, said Friedenberg, 66, of Richmond, an AARP volunteer at the state legislature. The victims "haven't done anything to bring it on themselves except trust someone."

Trusting the wrong person can be costly, according to a 2010 University of Virginia study of 54 older adults across the state who were victims of financial abuse. It showed they lost an average of almost $88,000, typically when someone close to them exploited their finances. Some losses were as high as $750,000.

The problem is getting worse. Reports of financial exploitation of the elderly made to the state Adult Protective Services office increased 38 percent from 2009 to 2011.

For the fifth year in a row, AARP Virginia will lobby the General Assembly next year to pass a bill that would make it a crime for family members, caregivers or others in a position of trust to manipulate another adult's finances for their own benefit. The penalty for conviction would be up to 20 years in prison.

Currently, "it's not particularly clear in the law how to prosecute these abuses," said Michael Huberman, a deputy commonwealth's attorney for Henrico County who trains law enforcement officers and other prosecutors about financial exploitation of older people.

Charges such as larceny or embezzlement don't always apply, even in cases where suspects claim an adult, determined to be incapacitated at the time, willingly signed over a power of attorney or gave money or property as a gift, he said.

Thomas Hafemeister, one of the University of Virginia professors who conducted the elder abuse study, said it's hard to get victims to report the crime for fear of losing the love of their child or the presence of a caregiver.

"That's the complicating factor: There's an emotional bond present," he said, adding that it's even more complicating when an adult has dementia.

Huberman added: "You're dealing with a victim at the time the theft is uncovered who might not be a source of information to you. It gives the suspect free rein to say whatever they want to say."

Michael Doucette, the commonwealth's attorney for Lynchburg and president of the Virginia Association of Commonwealth's Attorneys, which supports the proposed law, said the difficulty is establishing whether a situation is a family dispute or a crime.

Past bills have failed, said David DeBiasi, AARP Virginia advocacy director, over wording such as what constitutes a "vulnerable adult" or "undue influence" in persuading an adult to hand over money or assets.

For the first time, the legislature has referred the issue to the state Crime Commission to study other state laws on financial abuse of vulnerable adults and the consequences of those laws.

In the meantime, experts recommend looking for these red flags in an adult's affairs:

• An unexpected change of the person's will or power of attorney.

Friedenberg hired an attorney to demand the woman sign the condo deed back to her mother to avoid a lawsuit; the attorney also changed the will to remove the woman from the list of beneficiaries.

Jennifer Sergent is a writer living in Arlington, Va.