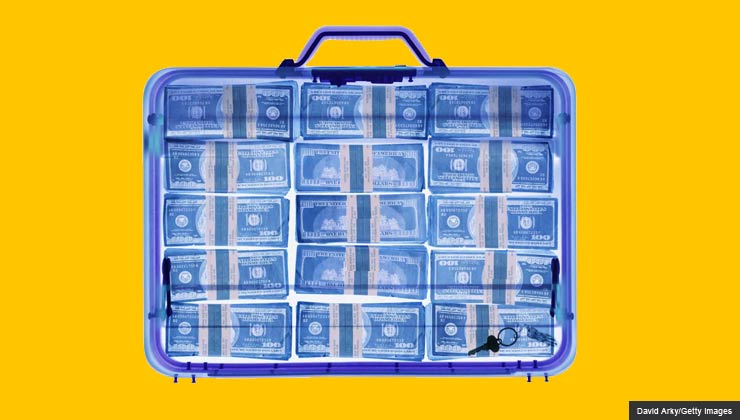 A random email asking you to claim a case of cash is a scam to get you to run up costly long-distance phone bills.

The bogus emails bear news of a 55-pound trunk shipped from the United Kingdom via Africa containing $2.8 million in cash. It's waiting at Atlanta's Hartsfield International Airport and has your name on it.

But before you prep your biceps to lift it into your car, know the real purpose: to get your money. To claim your trunk, you'll be required to run up outrageous long-distance bills by dialing an overseas number.

And of course there's no trunk in Atlanta.

With the subject line "ATTN: NOTICE OF YOUR UNCLAIMED FUND VALUED $2.8M," the emails may bear the name of Jeff Smith, NAUPA director. In reality, there is no such person at NAUPA, the group says.

If you respond, you're asked for your name, address and phone number (likely for placement on "sucker lists" for additional scam attempts). Then you get another email with a new designated helper, John Duncan Brown, the supposed overseas attorney who will "release your consignment."

It's now that telephone contact is requested. You're given a number, and when you call, you're put on hold, you're transferred, you're put on hold again, all with the goal of keeping you on the line as long as possible before you get disgusted and hang up.

The number may seem like an American one, with a three-digit area code. But in fact it's somewhere in the Caribbean and functions like a 900 line, running up charges to the tune of $4-plus per minute. The scammers have ways to collect part of those charges.

Only when your phone bill arrives do you realize how badly you've been had.

So, save yourself that pain. Never respond to such emails. Do you really think there's a trunk full of money waiting for you in Atlanta?

By law, financial institutions and companies holding unclaimed funds and property — forgotten bank accounts, unrealized inheritances or utility deposits, for example — must try to find the people the assets belong to. If they succeed, they typically send out notifications by U.S. mail.

When they can't find the people — often because of an address change — the money is turned over to the treasury of the state in which the account owner last resided.

NAUPA doesn't directly reunite people with missing money. Its members — state treasurers and other officials — do.

But they don't use email to get in touch. They wouldn't have your email address, but scammers can buy it on an underground list.

Today about $33 billion waits in state treasuries and other agencies for its rightful owners.

It's possible some of it belongs to you (be advised: If this money exists at all, it may be very small amounts). To find out, you can get in touch with your state treasury office, directly or via NAUPA, whose homepage has a database of state offices. You can also use MissingMoney.com, a NAUPA-endorsed group that helps in the search for unclaimed loot.