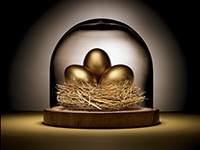 How safe is your nest egg from predatory sales agents?

Between 2005 and 2007, some 1.86 million Minnesotans 65 and older received mailings promising a strategy for avoiding probate court legal bills, and after in-home consultations, 1,277 bought the service. Sales agents then approached those buyers and pitched investment accounts called deferred annuities; 328 people bought them. There were several problems, Minnesota district and appellate courts later concluded: For one thing, the estates probably wouldn't have faced probate court costs. What's more, people their age should not have bought deferred annuities that incurred withdrawal penalties for up to 14 years.

Speak out on the Scams & Fraud message board.

In July, the court found that the solicitations by the American Family Prepaid Legal Corp. and Heritage Marketing and Insurance Services, both owned by the same father and son, violated Minnesota consumer protection laws. The firms were fined more than $7 million.

Jeffrey Norman, co-owner of AFPLC and president of Heritage, insisted that no investors had suffered financially from the plans. "I am sickened by the decision of the Minnesota Court of Appeals, and the entire justice system of the state of Minnesota," Norman said. He does not plan to appeal.

But Julie Nepveu, senior attorney for AARP Foundation Litigation, which supported the state's case, said, "This is an important victory. Older consumers who have significant retirement savings for their later years are a frequent target for sales of unsuitable annuities and other scams."

The facts of the case highlighted the risks. The average age of the people purchasing the prepaid legal plan was 75. Sales agents convinced prospects that the costs of probate court were so high and unpredictable that they needed the legal plans to protect their assets. Buyers paid approximately $2,000, most often for a "living trust" prepared by a Michigan-based law firm that received $275 for the work. That paperwork was then delivered by sales agents for Heritage, who sold deferred-annuity plans that restricted access to the funds. On average, the 328 Heritage annuities-holders were 75; an average of 89 percent of their assets were tied up for up to 14 years. The appellate judges concluded that "the annuities sold by Heritage were often completely unsuitable for seniors."

What it means to you: Before buying financial planning services and products, double-check with a trusted adviser.

Emily Sachar is a journalist and author based in New York.