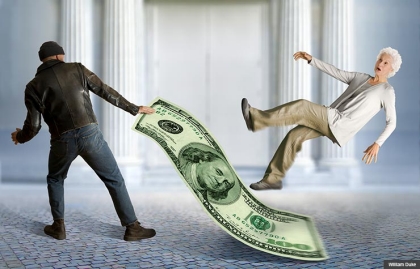 Never give a caller any personal information, including your bank account, credit card, Social Security or driver's license numbers.

Marjorie Shamgochian, an 89-year-old widow, lived alone in Turlock, Calif. In May 2010, she received a notice that she had won a multimillion-dollar lottery in England. She had been entered, the letter said, because her deceased husband was born there.

In June, a scam artist, claiming to be an attorney, called to say he would help her collect her winnings. After several more calls, he persuaded her to wire money to some overseas bank accounts to pay taxes and legal fees for the prize. She did, eventually wiring or transferring $255,366 from her Wells Fargo bank account and $504,010 from her Bank of America account.

Shamgochian then sued the banks for negligence and breach of fiduciary duty. She argued that when she directed the banks to wire substantial sums of money abroad, the banks should have suspected fraud. Normally, she only withdrew a few hundred dollars per month. Bank of America and Wells Fargo, Shamgochian said, had a duty to protect an older customer with no history of transferring such large sums of money.

Has it happened to you? Do you know someone who has been a victim of an international wired scam or fraud? Do you have tips other readers could use to avoid these risks? Speak out on our Scams & Fraud message board.

The banks argued that they could not be held liable for transferring money based on an authorized wire transfer order from a depositor. The banks claimed to have no duty to look into or monitor their customers' wire transfers. They told the court that Shamgochian's lawsuit had no basis.

In March, an appeals court reviewed a lower court's decision that sided with the banks, and found that the banks had merely accepted a wire transfer order. Banks are not ordinarily required to supervise depositors' use of their own money, or expected to prevent fraud against a customer. The court also said that it was not certain, based on Shamgochian's claim, that the banks actually knew that there was fraud in progress. It dismissed her case.

The U.S. Department of Justice is now investigating how banks may be enabling fraud against older consumers. Meanwhile, remember that telemarketers can be very convincing. Never give a caller any personal information, including your bank account, credit card, Social Security or driver's license numbers. Don't even verify your name or address. If you think the call is legitimate, hang up, look up the number and call back.

Robin Gerber is a writer and attorney based in Maryland.