Here's another scam resulting from an economy that's gone to the dogs: dognapping.

According to the American Kennel Club, the number of stolen dogs increased by almost 50 percent to 224 cases during the first seven months of 2011, compared with the same period in 2010. 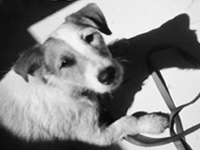 "These are specific cases we could document in which a dog was stolen — not lost," says AKC spokesperson Lisa Peterson. "I'm sure the real number is much higher."

In the most sinister (and rare) cases, canines are brazenly held for ransom.

In one instance, an Arizona couple allegedly demanded $5,000 for the safe return of a beagle puppy. At the rendezvous point where ransom was to be paid, the owner grabbed her pup as cops waited nearby. The couple were arrested and charged with extortion and theft.

More often, dognappers play a waiting game for reward money, says Peterson. "What happens is that criminals take a dog and then wait to see if a reward is offered," she tells Scam Alert. "And if it is, there's a phone call or the dog miraculously is returned for the money."

Last Christmas, a golden retriever missing from a pickup truck was returned to a Texas resident after he offered a $10,000 reward.

The man who produced the dog wouldn't tell reporters much, other than to say he'd found the pooch on a street corner and the reward would help pay debts from his late father's liver transplant.

In another case, a California woman paid a $10,000 reward — offered on a "no questions asked" basis — for the return of her missing chorkie (a Chihuahua-Yorkshire mix). It had been stolen from her parked Cadillac.

Both owners admitted to having suspicions about the person returning the dog but didn't press charges because they were happy to have the pet back.

Peterson cites several other reasons for dognapping. Some dogs, she says, are stolen — from homes, cars, parks and even pet stores and animal shelters — to resell via classified ads. "Or criminals just sell them on a street corner for a quick $50 or $100."

Still others are taken for personal use, or to be given as gifts. There's a noticeable uptick in dognapping around Valentine's Day and Mother's Day, she says.

No breed seems immune to theft, but Yorkies and Pomeranians lead the pack, because they're popular and their small size makes them easier to carry off. Puppies (and younger owners) also make for easy pickings, as evidenced by a theft in which an 11-week-old pup was ripped from the arms of a 5-year-old in Idaho.

Next: How to protect your pooch. >>

How to bite back

In addition to the obvious — keeping pets on a leash and never leaving them unattended in backyards or cars — your best defense against dognapping is to:

You may also like: Dogs keep owners on the fitness track.