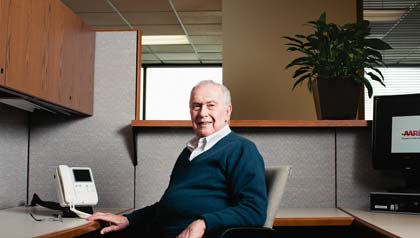 Paul Stern, 82, of Bothell, participates in a pilot program with the AARP Washington Fraud Fighter Call Center, calling older people who have fallen for scams, hoping to end the cycle of victimization.

A Minneapolis man got a panicked call from his "grandson," who said he was in Canada for a funeral and got arrested on trumped-up drug and firearms charges. Could "Granddad" send $2,075 for bail?

The next day the "grandson" needed more money for more fines. In all, the "granddad" sent nearly $34,000 in six installments before he allowed himself to realize he'd been scammed.

"The people who fall for this are not fools," said Paul Stern, a volunteer in AARP Washington's Fraud Fighter Call Center. "This man sounded intelligent. He prided himself all his life for being cautious and checking things out." But when the "grandson" called in distress, "his emotions caught him up," Stern said.

Stern, 82, of Bothell, spoke to the man on the phone for more than an hour as part of a pilot program designed to help older people who have been victims of fraud avoid falling for a scammer's line again.

People who have been snookered by a charlatan once may be more likely to be duped again, said Lois Greisman, associate director of the Federal Trade Commission's Division of Marketing Practices. The FTC receives millions of complaints a year, and "one-on-one assistance is just not doable," she said.

So the agency asked AARP Washington's Fraud Fighter Call Center, a program of the AARP Foundation, to provide counseling to scam victims nationwide. The goal, she said, "is to make people less susceptible to scams and less likely that they will be victimized again."

For the past six years, the Seattle-based Fraud Fighter Call Center has made 500,000 calls warning consumers across the nation of whatever flimflam schemes were being perpetrated at the time. It's that expertise, Greisman said, that the FTC turned to as a way to reduce the number of older people who become victims of trickery.

Since the beginning of the year, the FTC has asked some fraud victims if they are willing to be contacted by a volunteer organization. They ask people who are 60 or older, have lost money and have been the target of certain scams — prize promotion, sweepstakes, lottery and impersonation.

Their names and contact information are then given to the Fraud Fighter program. Volunteers such as Stern call, hoping to end the cycle of fraud victimization.

The FBI warns that con artists target older people because they are likely to have a nest egg and own a home; were generally raised to be polite and trusting, traits scammers exploit; and are less likely to report a fraud because they don't know whom to tell and are ashamed at having been conned.

In addition to working with fraud victims referred by the FTC, the Fraud Fighter team has taken on additional anti-scam projects this year:

A grant from the state Office of the Insurance Commissioner (OIC) underwrites a project to call people who will soon enroll in Medicare. Fraud Fighters brief them on how to spot Medicare fraud and pass on information about the OIC agency that can assist people in understanding Medicare.

A grant from the Financial Industry Regulatory Authority's Investor Education Foundation underwrites a program to call people who fit the profile of those who are likely to be victims of investor fraud. In addition, the program expands the Fraud Fighters' speakers bureau for presentations about all types of fraud.

Fifty volunteers are regulars in the Fraud Fighter Call Center, said program director Jean Mathisen. Some put in three hours a week; others work for 20.

The aim of the various Fraud Fighter programs, said Doug Shadel, AARP Washington state director, is "to inoculate people so they won't fall for it, or fall for it again."

To volunteer, to arrange for a Fraud Fighter speaker for an organization or group, or to request information about scams and schemes, call 1-800-646-2283 toll-free or email jmathisen@aarp.org.

Also of interest: Consumer Protection Bureau fights for you.