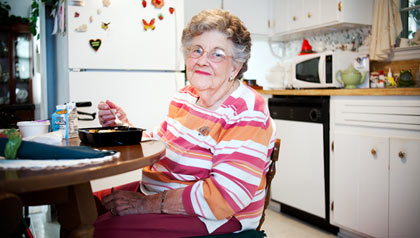 Home-delivered meals help Dorothy Wiles remain in her Columbia home. The state’s spending on in-home services has been cut in half since 2009, meaning others who could use similar help can’t get it.

Dorothy Wiles enjoyed an active life until progressive arthritis made it difficult for her to get around. These days the 84-year-old Columbia retiree relies on a walker and can't easily shop for groceries and fix her meals. Home-delivered meals have helped Wiles continue to live in her home. "It's really been a blessing," she said.

But cuts in the state budget mean other people who need similar help won't get it. The state has not reduced services to people like Wiles who already receive them, but no new recipients are being added to the program, said Tony Kester, director of the Lieutenant Governor's Office on Aging.

The office provides money to a network of nonprofit agencies that help older people remain at home longer. The agencies deliver meals or help get seniors to a community center for communal meals, provide rides to medical appointments and sometimes perform light housekeeping tasks.

Ard warned that without additional money, "it will be difficult to continue providing the services for a growing number of seniors in need of assistance, and many will have to be institutionalized in expensive facilities using taxpayer-funded Medicaid services."

Although eligibility for services financed by the Office on Aging is not based on income, nearly six in 10 who received home-delivered meals last year lived in poverty, Ard wrote in a justification for the additional HCBS money.

Next: Only three states had higher percentage of over-60 people at risk of hunger. >>

"Seniors whose nutritional needs are not being met are at risk for other health issues, which represent greater costs in terms of health care," said Teresa Arnold, AARP South Carolina legislative director. "A nutritional meal each day helps to reduce the number of visits to hospitals and emergency rooms, and stays in nursing homes."

Many at risk for hunger

The nonprofit agencies that provide the home-delivered meals and other services are relying on attrition to cope with the budget cuts, Kester said. When recipients move to a nursing home or die, no new clients are added.

"We'd rather use this means than to cut anyone from services," he said. Nonetheless, at least 4,000 people are on waiting lists.

The number of South Carolinians 60 or older has increased nearly 40 percent in the past decade to more than 900,000. About a third have incomes low enough to qualify for federal food assistance.

By 2030, the Office on Aging said, population projections indicate that more than 1.8 million South Carolinians will be 60-plus.

State Rep. Gilda Cobb-Hunter, D-Orangeburg, the senior Democrat on the state House Ways and Means Committee, said older people have "paid their dues. They should not be worrying about where their next meal is coming from."

The state reported a surplus of nearly $123 million for the 2011 fiscal year that ended June 30; Cobb-Hunter said some of that money should be directed at services for older residents.

Some nonprofit agencies that administer the Office on Aging's programs, including nearly 50 Councils on Aging, also receive money from donations and city or county governments. But that is shrinking also.

"Any time there are cuts, it's detrimental to your program and community," said Debbie Bower, director of Senior Resources Inc. in Columbia, which serves meals to Richland County residents.

Bower said costs for food, transportation and insurance have increased, but allocations from government have not.

To learn how to encourage state legislators to support a bigger HCBS budget, visit the AARP South Carolina website.

You may also like: U.S. health care law and home- and community-based services (pdf). >>

Gail Crouch is a writer living in West Columbia, S.C.