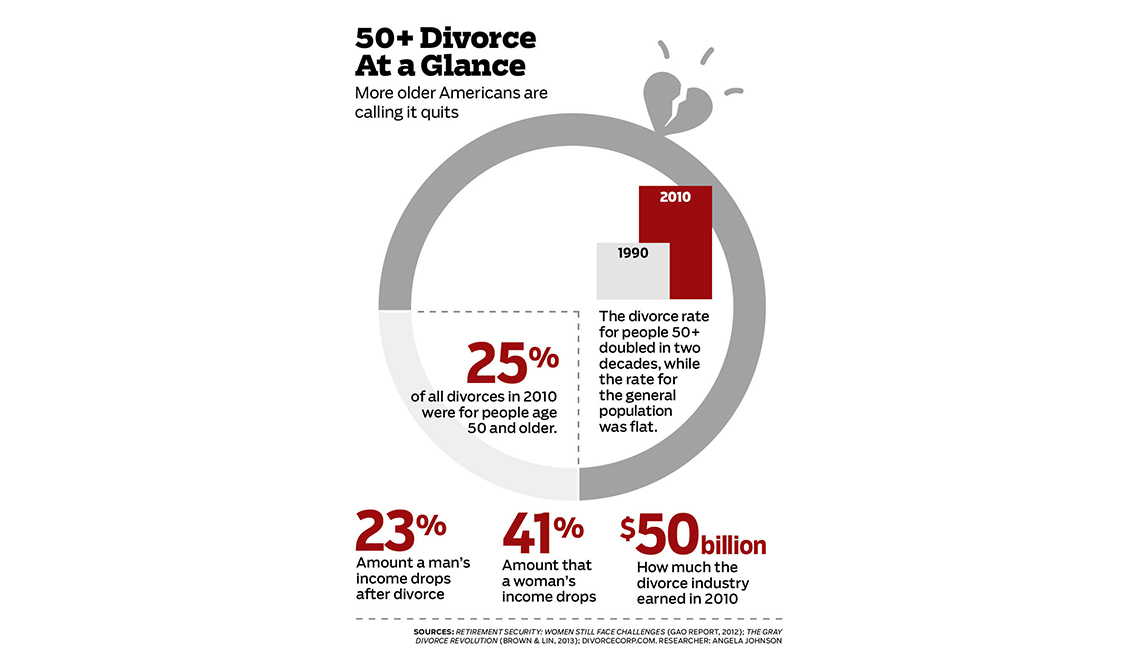 En español | Families and friends are often shocked when long marriages — including long, bad marriages — fall apart. You endured each other for 30, even 50, years, so why give up now?

I'd say it's for all the reasons that younger people divorce. The partners bore each other, harbor grudges, seek a different kind of life or fall in love with someone else. Being surprised at gray divorce strikes me as a form of ageism — as if one or the other of a couple (perhaps both) are somehow too old for disappointment, folly or hope.

Whatever the reason, older couples are definitely doing it. The divorce rate among people 50 and older doubled between 1990 and 2010, at a time when the rate for the general population was pretty flat. As an age group, they accounted for roughly 25 percent of all 2010 divorces, according to a study by Susan Brown and I-Fen Lin of the National Center for Family & Marriage Research at Bowling Green State University in Ohio.

A greater willingness to end unhappy marriages suggests that older couples today have more financial resources to fall back on. People usually have to see a way forward financially, no matter how slim, before splitting up. Women, in particular, are more apt to have paychecks and 401(k)s.

How the property is divided depends on state law and your personal negotiation. The starting place, after long marriages, is half the money for each. You can roll your share of your ex's individual retirement account into an IRA of your own, tax-free. The same is true of a 401(k) or similar plan. If there's a traditional pension, you can choose a lump sum or a portion of each monthly lifetime payment when your ex retires. Attorney Maria Cognetti, president of the American Academy of Matrimonial Lawyers with a practice in Camp Hill, Pa., advises dependent spouses to take the monthly payments if they don't know much about investing. The lump sum might not last as long as they thought.

If the amount of property is modest, dependent spouses, usually wives, will probably get alimony. Cognetti advises women to try to settle their claim in negotiation, even if it's for a little less money than they want. That provides certainty. You don't know what a judge will decide in court.

When estimating your budget as a single person, take a deep dive into your Social Security options. If the marriage lasted at least 10 years, you can collect on your ex's account. Spousal benefits can be claimed as early as age 62, provided that your ex has filed for benefits, too. If not, you can claim if your spouse is eligible for benefits and you've been divorced for at least two years, says Robin Brewton of SocialSecuritySolutions.com. Note that filing at 62 locks you into a lower check. You'd do better by waiting until your full retirement age, probably 66. If your ex dies, you can collect survivor's benefits.

However you slice it, life will likely be financially leaner for you both. That's divorce's bottom line — at any age.

Jane Bryant Quinn is a personal finance expert and author of  Making the Most of Your Money NOW.