En español | The global markets took a tumble on Thursday in Asia, Europe and on Wall Street, with the Dow Jones dropping nearly 500 points by late afternoon. It's yet another in a series of downward spirals that analysts attribute to investors' fears about the economic outlook in the states and abroad.

In August, the United States lost its gold-plated credit rating for the first time ever. Europe passed financial crises around from one country to another like a bad cold; and a crazy down-then-up stock market vaporized $2.2 trillion of savers' wealth.

See also: 6 things to do when the market slumps. 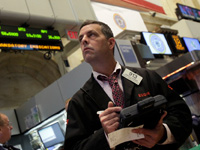 Many investors are riding out the ups and downs of the stock market.

All this drama brings home a key point about today's global economy: Your financial well being, like it or not, is tied to what happens in other countries. So before you decide what you personally ought to do, you might have some questions about what in the wide world is going on. Questions like:

What just hit me?

So far, you've been hit by a full-fledged "correction" but nothing worse than that. Defined as a drop of 10 percent from the most recent peak, corrections are routine (although they never feel that way), erupting once a year on average.

The last one hit in the spring of 2010, when stocks lost 17 percent for reasons strikingly similar to this month's drop — fears about debt in Europe and a recession in the United States.

Of course, there's no guarantee this correction won't turn into something worse. Bear markets, defined as a drop of 20 percent or more, occur about every 3 1/2 years, on average.

And the last one we had was especially vicious. Between October 2007 and March 2009, stocks lost more than half their value. The memory of that agony is one reason last week felt so scary.

And this time the sell-off was triggered by a downgrade of U.S. government debt. That's really bad, isn't it?

Standard & Poor's downgrade of U.S. debt from AAA to AA+ added some drama to the last week. But its role was mainly symbolic: The price of U.S. debt actually rose, as investors seeking safety piled into Treasury bonds.

That's the opposite of what you'd expect if investors cared mainly about the downgrade.

Instead, they really seemed to be reacting to an increasingly downbeat outlook for the U.S. economy. "Market volatility is always high when investors' expectations about the economy take a sudden turn," said Vanguard senior economist Roger Aliaga-Díaz in a letter to Vanguard shareholders.

Next: What's Europe got to do with your money? >>

Adding to the economic fears was Washington's new obsession with cutting spending. While closing the deficit is necessary in the long run, doing so won't fight off recession now. By focusing entirely on austerity, many economists say, Washington is throwing away its best tools for boosting growth.

"The most effective fiscal policy action to generate activity and jobs would be a major program of public works to re-employ unemployed construction workers," wrote Nigel Gault, chief U.S. economist of HIS Global Insight. "But we can safely assume that is not on the agenda."

And what's all this about Europe? What does that have to do with my money?

For all the talk of a U.S. debt "crisis" in Congress last month, there was never any doubt that the United States could pay its bills, once Congress renewed its permission to do so. If worse comes to worst (and we're not anywhere near worst), the Federal Reserve can always print dollars to pay, since all of our debts are denominated in our own currency.

That's not true of, say, Greece, Portugal or Spain; all three have slow economic growth, debt burdens worse than ours and have to borrow in a currency they don't control, the euro. Last week, fears rose that the problem was spreading to Italy, where government debt stands at 120 percent of GDP (compared with 75 percent in the U.S.).

"If the crisis were to hit Italy, it would spread also to France, to the rest of the euro area," Domenico Lombardi, a senior fellow at the Brookings Institution told CNN. "And the contagion would spread to the U.S.," because U.S. banks have extensive holdings in European banks.

To fend off that scenario, the European Central Bank — the continental equivalent of the Federal Reserve — began to buy Italian and Spanish bonds, and European stock exchanges stopped speculators from betting on further declines in European bank stocks. Over the Aug. 12 weekend, Italy's cabinet agreed to a plan to cut spending and raise taxes to bring debt under control.

So far, those stopgap measures have helped restore confidence. And that's very important — if anything is likely to bring back a 2008-style financial crisis in the near future, it's not the U.S. downgrade. It's Europe.

So, we're going to have that kind of catastrophe all over again?

For now it seems unlikely. The 2008 collapse was triggered by sudden, massive defaults on private loans, starting with mortgages and the complex securities that depended on them.

Today, by contrast, it's government loans that have people scared. The problems are serious, but they're not coming as a surprise, and authorities have time to work on fixes.

In addition, the financial system is better prepared for trouble this time around. Banks have raised capital, notes Seth Masters, chief investment officer of asset allocation at money manager AllianceBernstein, and U.S. corporations have $2 trillion of cash on hand.

Next: Is another recession in the future? >>

Whew! So we're not going to have another recession at all?

Unfortunately, we don't know. The Federal Reserve has said it plans to keep interest rates near zero for another two years, but that doesn't add much oomph to the economy. It doesn't help either that Americans have turned suddenly pessimistic about the economy. Lack of confidence can be a self-fulfilling prophecy.

Goldman Sachs now puts the odds of recession at one in three. Economist Nouriel Roubini, famous for having seen the 2008 crash coming, pegs it as greater than 50 percent. Then again, he's known for being pessimistic.

What can I do about it?

Every financial adviser with any perspective will tell you to stick to your long-term investment plan. As Schwab's chief economist Liz Ann Sonders puts it, "Panic is not a strategy." A well constructed plan will have allowed for moments like this and made sure you had enough cash on hand without having to sell at fire sale prices.

If you feel you have to do something — anything! — to keep from going crazy, then read the AARP Bulletin's "7 Things to Do When the Market Slumps," for inspiration.

Eric Schurenberg is the financial editor at large for AARP the Magazine and a former managing editor of Money magazine.