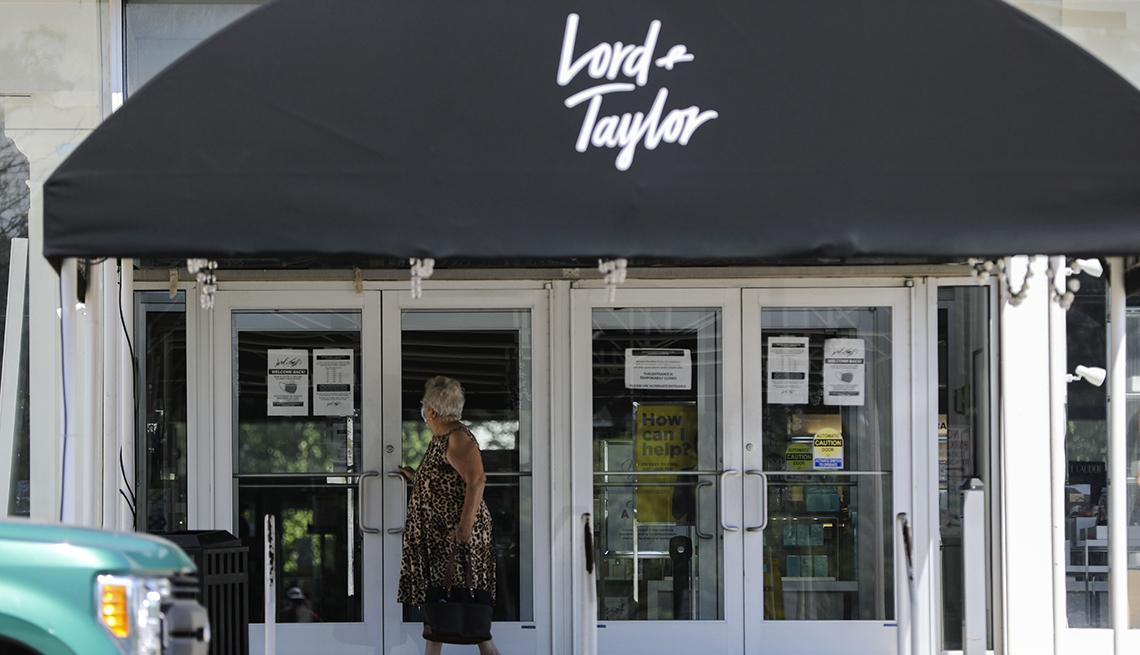 En español | COVID-19 did not create the so-called retail apocalypse. More than 9,300 U.S. stores closed last year, and over 5,800 did the year before that, according to tracking by Coresight Research. A timeline by business analytics firm CB Insights dates the apocalypse to at least 2015.

But the pandemic has been its most swiftly destructive horseman. Following years that saw major retailers swapping hands in debt-bingeing buyouts while consumers shifted from shopping malls to shopping online, the mass shutdown of 2020 pushed some of America's most iconic brands to the brink.

The past few months have brought a parade of headline-making Chapter 11 filings, with historic department stores and apparel purveyors at the front. And while bankruptcy doesn't necessarily mean out of business, don't be surprised to see favorite locations shutter. Here are some of the biggest-name bankruptcies to date and what their reorganizations might bring.

The company behind some of the best-known brands in women's fashion will close 1,600 of its approximately 2,800 stores as part of a Chapter 11 restructuring aimed at paring around $1 billion in debt. The filing came about seven months after Ascena liquidated the last stores in its original line, DressBarn, which now operates online-only, under new ownership.

Ascena's biggest names — plus-size bellwether Lane Bryant and premium brands Ann Taylor, Loft and Lou & Grey — will lose only a “select number” of stores, according to a company statement. The closures will mostly hit the tween fashion chain Justice, which will lose a “significant number” of stores, and plus-size line Catherines, which is shuttering altogether.

The brand that for generations defined the American way of dressing for success — especially the American male executive way — faced strong headwinds as people increasingly dressed down for the office and then, with the pandemic, stopped going entirely. When it entered Chapter 11, the country’s oldest ready-to-wear clothing retailer had already opted not to reopen 20 percent of its roughly 250 U.S. stores that went dormant in March, and it’s expected to close its three U.S. factories.

In a post on its Facebook page, Brooks Brothers said bankruptcy proceedings would help it facilitate an ongoing sale process while managing “what has been an incredibly challenging period for all industries, especially retail.” A joint venture of mall developer Simon Property Group and Authentic Brands Group, a brand-management firm, won court approval Aug. 17 to buy Brooks Brothers for $325 million. The new owners pledged to keep at least 125 Brooks Brothers stores open.

The 600-plus restaurant chain — whose pizza, arcade games and (until it was retired last year) animatronic band fueled countless raucous kids’ parties — was especially hard-hit by a pandemic that halted dining out and large gatherings virtually overnight. The company saw revenue plummet by 90 percent, increasing pressure to deal with nearly $1 billion in long-term debt.

As of the late-June filing, CEC, which also owns the similarly themed Peter Piper Pizza chain, had reopened 266 of its 555 company-run outlets. (Some locations are franchised and are not parties in the Chapter 11 process.) While CEC said it plans to continue reopening restaurants that were shuttered by the coronavirus, the company filed a list with the court of 34 locations that will permanently close.

The family-owned department store that pioneered off-price retail in downtown Manhattan will wind down operations and close all 13 of its mostly New York City–area locations under Chapter 11 proceedings. The company (which is not affiliated with the similarly named real estate firm) immediately commenced a chainwide going-out-of-business sale.

Billing itself as “New York’s Best Kept Secret,” Century 21 offered deep discounts on designer clothes and accessories. The original store, located in the shadow of the World Trade Center, survived the 9/11 terror attacks. But the company was unable to outlast the pandemic, blaming its demise on insurers declining to pay $175 million in claims Century 21 contends it is owed under business-interruption policies.

“Without receipt of the insurance proceeds, there was no viable alternative but to begin the shutdown,” the company says in an FAQ for customers. A lawsuit Century 21 filed against its insurance providers is being folded into the bankruptcy case.

Opened 85 years ago as a Pittsburgh health food store that featured the then-exotic specialty of yogurt, what became General Nutrition Center grew into a mall-staple seller of vitamins, supplements, and beauty and dietary products, with some 4,800 retail locations. The company plans to close 800 to 1,200 of them as part of its Chapter 11 restructuring.

With the decline of malls, GNC had already closed several hundred stores in recent years but still accumulated heavy debt. In an FAQ list for customers, the company says efforts to refinance the debt and “position ourselves for long-term growth” were derailed by the pandemic. GNC is now looking to either reorganize with its lenders’ backing or execute a sale to an affiliate of its biggest shareholder, Harbin Pharmaceutical Group.

These well-known names are also among more than 100 companies that have filed for Chapter 11 protection this year.

Filed for bankruptcy: May 15

An American institution that anchored malls coast to coast, J.C. Penney was already in a long-term struggle for survival when COVID-19 hit, having lost billions during the 2010s and shrinking from more than 1,000 stores to about 850 when it filed for Chapter 11 protection. Amid the pandemic, sales for the three months ending May 2 fell by more than half and the company's long-term debt grew to nearly $5 billion, according to SEC filings.

In July, Penney announced plans to close more than 150 stores as part of a restructuring designed to “create a smaller, more financially flexible company.” Liquidation sales are underway.

Filed for bankruptcy: May 4

The brand that became synonymous with preppy style (don’t take our word for it; ask the Urban Dictionary) has had a tumultuous recent history, churning through CEOs as it battled debt and changing consumer tastes. The company’s Chapter 11 restructuring appears set to alleviate at least one of those problems, with lenders agreeing to convert nearly all of J. Crew’s $1.7 billion debt into equity. A bankruptcy judge approved the plan on Aug. 25, and the company exited Chapter 11 on Sept. 10.

In the meantime, about 95 percent of the company’s nearly 500 J. Crew, Madewell and J. Crew Factory stores shuttered at the start of the pandemic have reopened. J. Crew closed eight stores permanently in August and had targeted dozens more for termination as part of its “real estate optimization strategy,” but those plans were paused when the company secured new terms with landlords that are projected to save it $130 million on its leases this year and next.

The nation’s oldest department store announced Aug. 27 that it is closing all 38 of its locations, with liquidation sales commencing immediately. The death notice came nearly a year to the day after Lord & Taylor was acquired by fashion-rental startup Le Tote, and 25 days after both companies filed for Chapter 11 protection.

Lord & Taylor said the filing was prompted by the “unprecedented strain” on its business from COVID-19. It had already started the process of shutting down 24 stores while it searched for a buyer. “While we are still entertaining various opportunities, we believe it is prudent to simultaneously put the remainder of the stores into liquidation to maximize value of inventory” while pursuing those options, Ed Kremer, the company’s chief restructuring officer, said in a statement.

Lord & Taylor had been struggling well before the pandemic, shifting through multiple owners in recent years (including, at different times, the corporate parents of former rivals Macy’s and Saks Fifth Avenue) and closing its historic flagship store on Fifth Avenue in New York City, which became a WeWork in 2019.

Filed for bankruptcy: May 7

The high-end department store, which also owns the even more high-end Bergdorf Goodman plus a string of Last Call clearance centers, entered Chapter 11 with a debt load of $5.1 billion, a hangover from two leveraged buyouts since 2005 and changing consumer habits. The company said in its bankruptcy filing that the pandemic disruption forced it to “proactively address its liquidity position and capital structure."

"This is not a liquidation of our business,” CEO Geoffroy Van Raemdonck said in a letter to customers following the filing. Neiman Marcus aims to shed up to $4 billion in debt through restructuring and said in June that, with $675 million in financing secured from creditors, it is on track to emerge from bankruptcy in the fall.

Long the country's go-to purveyor of funky home goods, Pier 1 isn't technically a pandemic bankruptcy: Its Chapter 11 filing came a few weeks before the shutdowns and stay-at-home orders. But the coronavirus finished what years of shrinking sales and spiraling losses started. After initially announcing plans to shutter up to 450 of its 900-plus stores while searching for a buyer, the company said in May that it would liquidate the entire chain.

Pier 1 spent months trying to find “a buyer who would continue to operate our business going forward” but found no takers in a “challenging retail environment [that] has been significantly compounded by the profound impact of COVID-19,” CEO Robert Riesbeck said in a statement. The chain's intellectual assets were scooped up at a bankruptcy auction by a Florida-based e-commerce venture that plans to reboot the brand online.

The discount department store, which grew from early-20th-century roots in the Mississippi Delta into a national name in off-price fashion, ceased e-commerce and commenced going-out-of-business sales at all its approximately 280 stores after filing for Chapter 11 bankruptcy.

Stein Mart began, and operated for decades, as a single family-run store in Greenville, Mississippi. The company started expanding rapidly after moving its offices to Florida in the 1980s and going public in 1992, becoming a shopping-center staple in the Southeast and eventually reaching 30 states.

But Stein Mart had not turned a profit since 2015, and sales plunged by more than half in the first quarter of 2020 while debt grew to nearly $200 million. The “challenging retail environment,” coupled with the pandemic, left the company lacking the liquidity “to continue operating in the ordinary course of business,” CEO Hunt Hawkins said in a statement.

The menswear conglomerate sought Chapter 11 protection two weeks after announcing plans to reduce its corporate workforce by 20 percent and to close up to 500 of its 1,450 stores. The company previously reported a 60 percent sales drop for the first quarter of 2020. It plans to continue operating while undergoing a restructuring aimed at cutting its debt by at least $630 million.

Tailored Brands is the successor company to Men's Wearhouse, a dominant player in the men's suit market long known for its TV commercials featuring founder George Zimmer promising, “You're going to like the way you look.” It acquired rival Jos. A. Bank in 2014 after a contentious takeover battle and also owns K&G Fashion Superstore and Canadian menswear chain Moores. The company was already being buffeted by longtime consumer shifts to e-commerce and more casual office wear when the pandemic hit.